“A very musical album, Another Day, Another World travels through the various phases of a more contemporary EM with soft appealing ethereal harmonies which melt into suave synth solos” 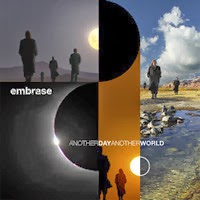 (CD/DDL 73:31) ****  (E-rock and harmonious New Berlin School)
Some dense synth layers which float like tears of violins among the rustles of angelic choruses open the very ethereal "Another Day". The sonic envelope is quite impressive for a so short track. She is tied to a philharmonic approach which inhales the influences of Bernd Kistenmacher's last opuses. By the way, what jumps in ears with this comeback album from Embrase is this meticulous musical scenery by Marc Bras. “Another Day, Another World” comes 8 years after Dreamworld. To make history short; Embrase is the Dutch synthesist Marc Bras who had seduced the electronic world in 2005 with a first album (Dreamworld) which, according to what I read here and there, was strongly influenced by Tangerine Dream of the 80's. Eight years later Marc Bras delivers to us a strong album where the rhythms, which evolve constantly inside their minutes, are superbly coated by synths among which the charming solos, rather lyrical I have to say, unveil some nice electronic harmonies which harmonize their charms within sighs of violins, choirs with some dense seraphic veils and ethereal mists. With its 15 tracks scattered among nearly 80 minutes, “Another Day, Another World” offers a great electronic sonic parade with very contemporary rhythms which are immersed in approaches as ambient as ethereal.
"After Eight Years" gets a grip at this seraphic intro with a harmonious approach of which the first morphic veils float as in "Another Day". The rhythm is slow, mesmerizing, with fine tribal percussions and where the heavenly choirs hum an evasive melody and unite their singings to the tears of synths and to their violin layers which blow among strongly lyrical solos. We always stay in the soft comfort of the ambient rhythms with "Daydreaming" whose intro reminds me of Leftfield and their Africa single. The rhythm is softer on the other hand with a structure of floating down-tempo where the synth gets dressed of breaths of trumpets as much sensual as nostalgic. After an introductory structure which is also inspired by the sweetnesses of "Daydreaming", "Touch" shakes a little bit the meditative ambiences of this Embrase's last album with good percussions which set ablaze a rhythm delicately jerked. A rhythm always wrapped up by synth pads which this time are as much twitchy than the harmonies of these choirs which submerge of pastel heat the ambiences and the electronic rhythms of “Another Day, Another World”. These harmonies are always tinted with these heavenly choirs of which the empty singings get lost in the iridescent fogs of a synth which subdivides its moods with good nasal solos. That goes down very well. "Change your Mind" embraces a synth-pop structure with very nervous sequenced arpeggios of which the harmonies skip in the hubbubs of percussions. We dive in the 80's with this rhythm which merges synth-pop and very accessible world music on harmonies which are divided between sequences, celestial singings and solos of a synth which multiplies its nasal breaths like airs of snuffly trumpets. A synth which spreads breaths of panpipes, as well as very musical solos, on the contemplative, although livened up by a delicate paradisiacal mood, "Time". Dreamer and lonely, "After the Rain Comes the Sun" is a very good electronic ballad, just like the very beautiful "Another World" and its delicate rhythmic gallop deafens by scattered rotations of percussions, and of which the delicate structures of rhythm are decorated with soft pensive airs.
"3.33 AM" opens the 2nd part of “Another Day, Another World” as "Another Day" had begun it. A 2nd part clearly more livened up where the influences of the electronic rhythms by Robert Schroeder and Tangerine Dream overheat the loudspeakers. After a very floating intro, "Moving Silence" borrows a structure of rhythm of which the soft oscillations are harpooned by the roars of percussions. The synths are pleasant and coo some airs of jazz a bit lonely in dense shrouds of electronic mist. And the comparison with Robert Schroeder is very tangible, especially with the very funky approach of "Inspiration", while the curt and nervous rhythm, encircled by a delicately stroboscopic line of jumping keys, of "Amazing" reminds me rather of Tangerine Dream from the Miramar years, just like the lively "Back to Normal" and its good synth solos, as well as the very rhythmical "Another Day, Another World" which leans a little more on Jerome Froese's kind of techno-electro music. But no matter the rhythmic influences, Marc Bras' harmonious envelope is resolutely his with synthesized harmonies which are constantly harmonized with the ethereal choruses. "Where Does it End" assuages the overheated ambiences of the second portion of “Another Day, Another World” with a beautiful lunar ballad where the synth layers cry in a cosmos flooded by dusts of stars and their seraphic singings.
Forged in rhythms as noisy as the mellifluously pensive atmospheres, “Another Day, Another World” travels through the various phases of a more contemporary EM. Here is the very beautiful album that will please undoubtedly to fans of electronic rhythms. But its main strength is not these rhythms, although they are very lively. It's rather these appealing ethereal harmonies which melt into some suave synth solos. Calling back these years when synths were more weavers of dreamy solos than the cold and calculated harmonies, as those whom we find exactly in these contemporary rhythms. If you like the Robert Schroeder's 2nd wave, as well as the Miramar and TDI years of Tangerine Dream, “Another Day, Another World” will undoubtedly be well in your ears. It fits rather well in mines.
Sylvain Lupari (February 28th, 2014)
Publié par Sylvain (A.K.A. Phaedream) Lupari à 18 h 45