“Modern Ruines is an album that will please those of you who like wild sequencing, nice melodies à la Schmoelling with a bit of ambiospherical, but metallic, moments” 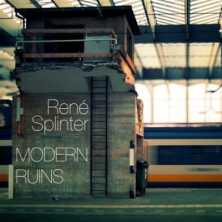