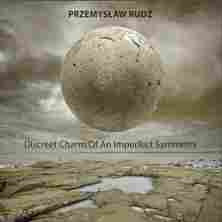 The black breaths with soft tints of oracles extricate themselves from nowhere to float as long hair in water. It's of breaths and mooing that "Movement One" gets in our ears. The musical background is of sublimity with its slow orgiastic synth pads which interlace in a ballet moved by the breaths of the void in an introduction eaten away by some hostile mooings. These orchestral pads weave an immense cosmic veil where sparkle the stars and chirp the interstellar elements. The illusion to be in a farm of aliens is metaphorically as plausible than improbable with all these quirky tones which sit under the huge tears of violins. Tears which begin waltzing against boredom, forging a dense morphic dance where the sound elements are going downhill until they get lost in the inanimate jingle of cymbals. These jingles ring and resound with uncertainty in the soporific arms of those violins sighs and lamentations of some heavy layers built in poetic tones of organs, introducing little by little the rhythm of "Movement One" which raises itself under the gallop of the percussions and which offer themselves to the sharp bites of a guitar and of its surgical solos by Jarek Figura. More than 12 minutes of morphic atmospheres, even lethal, for 2 minutes of groovy rhythm. Here is the rundown of “Discreet Charm of an Imperfect Symmetry”.
Those who know the universe of Przemyslaw Rudz' sound alchemy know that it is one of the less accessible. And “Discreet Charm of an Imperfect Symmetry” won’t change absolutely anything of it. Built on long improvisation sessions to which were grafted the partitions of Jarek Figura on guitars and Marek Matkiewicz on drums, “Discreet Charm of an Imperfect Symmetry” is an electronic improvisation in 3 movements where all the essences of the floating cosmic rock roam over structures in which the tones will nail you on your seat.
"Movement Two" offers the same ambiospherical pattern with hootings of suffering machines and spectral groans which are floating among hoops which collide in a slow cosmic movement where the noise under all its forms and dimensions thrones on the ambiences. You must not have the ears virgin of heterogeneous tones because the exercise can turn out perilous. Except that we let ourselves win by a wave of heat and comfort where strata a bit orchestral sing above the waves of the Sea of Tranquillity, while that we hear some fine pulsations which, quietly, introduce a latent rhythm of which the hatching passes by a nervous movement of sequences. While the stars are sparkling, a concerto for drums and synth solos purge the tranquillity and push "Movement Two" in a heavy and furious phase of e-prog electronics where the hybrid solos of Przemyslaw Rudz tear our eardrums. Solos with twisted echoes, where are melt some heavy riffs of e-guitar, mould the most intense moment of “Discreet Charm of an Imperfect Symmetry” which collapses under harmonies murdered in the rustlings of dying metal, forcing this passionate rhythm to turn back quietly into its ambiospherical tunnel. "Movement Three" is of atmospheres with tones and electronic lamentations which shout such as cosmic whales failed on the cliffs of an interstellar ice floe. Those who like Jean Michel Jarre's ambiences on En Attendant Cousteau will be simply delighted.
The more Przemyslaw Rudz moves forward in his progression, the more audacious he becomes. “Discreet Charm of an Imperfect Symmetry” is undoubtedly his most experimental work to date. But even when the synthesist-astronomer is escapes in his improvised spheres he succeeds constantly in weaving a charming sound environment where the ear has difficulty in seizing the whole of its dimensions and all of its colors. This album is for fans of sound, sound experiments, tonalities and ambiences. For others? I would recommend Paintings or still Summa Technologiae. So there will be a connection between your ears and the universe of Przemyslaw Rudz that you will tame gradually until his most crazy creative escapades find a reason to your ears.
Sylvain Lupari (June 27th, 2013)
http://www.gutsofdarkness.com/god/objet.php?objet=16181
Publié par Sylvain (A.K.A. Phaedream) Lupari à 12 h 58