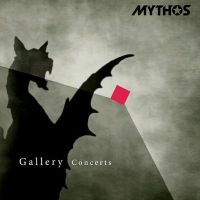 It’s been a while since Mythos, or Stephan Kaske, had play in concert. For the occasions of private views, exhibitions, festivals and art galleries,  the mythical German musician began a series of intimist concerts where he shows all his dexterity, as musical as creative, over 5 tracks where finely polished structures cross a hardly perceptible improvisation, so much the tone is just. For those concerts Stephan Kaske used an array of electronic equipments, allying analog tones to digital ones without the uses of PC and/or Laptops. Gallery Concerts is the audio witness of an outdoor concert presented in Essen on August 2009. The result is a vivifying and warm EM where the rhythm evolves on sequences in crossing in the Mythos purest sound tradition, but with a more accessible approach.
Fine arpeggios waddle innocently on a sequence with airs of a lullaby on the opening of "Analogdigitalpolyphomono". A fine bass line shapes a soft and supple rhythm filled by a German psychedelico-electronic musical universe of the 80’s (Mythos, Clara Mondshine and Baffo Banfi). Charmer, Mythos integrates an electronic flora which stammers on metallic percussions, of which the rolls shape a strange automated military march, which pierces a crystalline cloudiness of a discreet groovy and psychedelic approach. A first rather quiet track before that boiling "Filtergatemania" skips and bites a hiccupping structure hoquetante. A structure livened up by cute jolts which titillates on a heavy and caustic bass line as well as a minimalism sequence drowned by good intrusions of synth to cooing chords and by good strikings of percussions. The more the concert progresses and the more Mythos tames his free public. If the first 2 tracks stick easily, it’s quite the opposite with "Improviflutecho" which wiggles on untidy arpeggios, bouncing in a shower of synth keys which come and go in a circular echo. We are at the crossing of analog and digital EM with this hiccupping structure hatched by scattered percussions and wrapped by a foggy synth and ochre ambiance, which is very representative of Stephen Kaske's eclectic sound universe. On a crushed rhythm, the German synthesist succeed in introducing a wonderful charming flute (the one we can see on the video), engendering a suite of fluty loops with languorous and sharp tones which are melting in a rhythmic to undulations which wave such as a carousel.
A very good track but there is better with "Mysticauroraborealis", the key track of this live album. A little as on the first 3 tracks, solitary keys roam in a sound world in evolution. A synth line encircles the track, such as a chipped stroboscope, which rolls on a rumbling bass line and percussions to excessive movements, creating a heavy and slow rhythm which would make Peter Gun's delights. Except that, brilliant, Stephan Kaske dresses "Mysticauroraborealis" of a psychedelic approach, from the flower power years (Iron Butterfly, Jefferson Airplane and others) with a simply delicious electronic bagpipe (which acts as an old organ) and a vocoder which seems out of its time. This is a superb audacious and inspired track which is going to make heads waddle. "Sequenctrumpetextasy" ends Gallery Concerts with heaviness. An avalanche of synth strata follows an intro with sinister tone to fall into a boiling sound puddle, hammered by percussions which find echo with heavy resonant pulsations. This synthesized intro becomes sequential, leaving all the liberties at the synth to exploit a symphonic approach with fabulous twisted solos in a structure which becomes more atmospheric and more ethereal, before taking back the heavy musical coat of its opening.
Well...I liked a lot this last opus of Mythos. Of course that I’m sold to the German synth man cause. Stephen Kaske produced so many small pearls that I fast became an addict. But on the other hand Gallery Concerts is not really representative of the works from the solitary German. It’s a rather accessible album which touches slightly the soft creative madness of Mythos, in particular with "Improviflutecho" and the superb "Mysticauroraborealis". So, fans of Kaske find their parts with these 2 tracks. While those who knew nothing about Mythos, or about its EM which is astride Berlin School and Krautrock, are discovering a complete artist who innovates and builds music to bipolar tendencies, hybrid rhythms and strangely enchanting ambiances. In short they have great performances tinted tinged with an approach which shows the innovative nature of the character.