The Netherlands became the cradle of modern EM. With musicians so experienced as Ron Boots, Gert Emmens, Nattefrost and others, Netherlands took back the German torch in what concerned EM to Berlin School soft steams which caress a rhythmic and orchestral modernity less minimalism and more progressive. What we call New Berlin School should rather be named Dutch School. Since 2006, Groove label organizes the annual two festivals, E-Day in spring and E-Live in autumn, in the city of Oirschot, more specifically in Enck Theater. On April 11th, 2009, this EM rave-up also celebrated the 25th anniversary of Wavestar 1st album, or cassette, Mind Journey. During this festival, quite as E-Live held later in the year, Groove prints in limited version cd-r including original and unique music of the artists which participate at these festivals. While waiting for the next festival of 2010, which will be held on May 22nd, here is a review of the one from E-Live 2009. 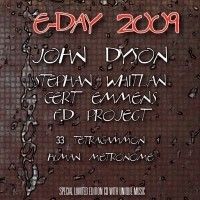 Give honor where honor is due, Wavestar’s John Dyson is opening this limited edition cd-r. It is the very first time that my ears cross John Dyson music and I have to admit that I am a bit perplexed. I expected robust Berlin School style, but they’re rather soft and very catchy melodies that Dyson proposes us. As Posevalue where a fluty synth shapes a medieval approach. The rhythm is lively and rests on good percussions to hybrid directions on a structure which brushes a brief ambient passage. Signals is a soft ethereal melody of which first chords of acoustic guitar are getting lost in soft synthesized orchestrations. The synth multiplies the moving and harmonious layers which waltz among sinking keys with a charming limpidity. Dyson handles his synth with dexterity, creating symphonic tones which perfume an idle sweetness on misled chords by guitars and celestial harps. A structure which is similar to Outpost, although more dramatic, with its grave chords which surround a quiet avalanche from notes sounding as acoustic tones. The intensity gets higher with very beautiful strata of a e-guitar which rush towards a drum to short untimely rolling which get lost in dense synthesized orchestrations where a pleiad of fickle chords flutters with nonchalance before succumbing on strikings of a heavy drum kit which draws a slow and caustic tempo. Good electronic blues!
Gert Emmens's Masquerade is in the purest tradition of its works; vaporous and cosmic intro, wave-like and hilly sequences in an ambiance mi cosmic and mi unreal unique to Emmens. Synth solos fuse on this hybrid structure where the rhythm remains latent, crumbling under sublime solos of a very harmonious synth which frees its chiseled sufferings and its monastic choirs under hilly sequences, before sinking into a somber and atonal passage. Subtly, Emmens shapes again the rhythm with slamming percussions of which the echo pierces the misty opaqueness before embracing suave and hybrid synth lines to crossed solos, so joining the constant rhythmic duality of Gert Emmens's sound universe. Again, some great Emmens there and sometimes, I wonder from where comes all this creativity? F.D. Project’s Polarstern tacks under a somber wave-like sequence and breaths of a distressing synth. Another sequence, more crystal clear, subdivides the tempo which becomes more hatched and which hiccups under good percussions and a sequential line as mesmerizing as hypnotic. Beautiful curly solos cross this rhythmic to melodious intertwining, before caustic and ethereal guitar solos finalize Polarstern rhythmic progress. A title which will certainly please F.D. fans. Human Metrodome is unknown to me and offers a long ambient title to Roach steams with Cosmic Hweeldi, where somber cosmic waves blow among the curves of galactic grottos stalactites. Hesitating sequences, moulding an indistinct tempo, Stephan Whitlan's Out of the Box gropes in an exploratory musical universe where fragrances of Tangerine Dream can be smell. Mainly because of synth strata and e-guitars fusion which float in loops on a hesitating sequential movement, covered with percussions to metallic felting. Other unknown group to me which makes in very deep ambient, Tetragammon offers in Divine Bliss a very crystal clear cosmic journey where everything seems to be at dreams reaches.
Divided by 3 very varied musical approaches, E-Day 2009 is a beautiful way of discovering the musical universe of Groove, as well as new names and names less known for EM fans (I think in particular of Dyson, Whitlan, Human Metrodome and Tetragammon) whom revolve in this musical universe to unlimited borders that is EM. The next E-Day will be held on May 22nd and will present interesting strong artists as David Wright, Callisto, Free System Project, Erik Seifert and E.R.G. For more information, visit the Groove site; http: // e-day.groove.nl/