Here is a finest EM opus of the contemporary area. When you will look at The Call of Shiva’ artworks, Vol.1 as much as the Vol. 2, don’t get fooled by those pictures that look like mythical Hindu. Far from being inspired by a kind of Hindu religion at all, The Call of Shiva is a powerful CD with random and complex movements in a boosted atmosphere. One of the good albums that respect the whole spirit of Berlin School, up to the most distant parts of its imaginary borders, I heard since a long time. A timeless musical voyage, with today’s sonorities, that few artists are able to make us live. Indra persists, and signs another monument of EM. Him who begins to accustoms us with his small chef d’oeuvres.
Pole Shift starts with a shimmered sequential line that flies with grace and voluptuousity, on a spiral movement that carefully goes up and down. Sparkling, percussions maintain a nervous beat which modifies subtly its race on limpid keys, which are moving away from the initial sequential movement. A beautiful Berlin School, with all of its nobility, on a rhythm that skids to cross a vaporous atmosphere just to redo its strengths and leave again with more luminosity. On a cosmic sea, aroused by astral sirens, Great Ancient Gods Are Coming floats on a soft atmospheric movement. Synth lulls its orchestral waves with depth and serenity, whereas a superb sequencer emerges and agitates the tide, which whirls while being folded up on its furrows. 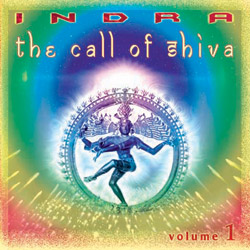 The intro of In Search for a New Land mixes a moderated sequence, kind as Pole Shift, with the vaporous quest of Great Ancient Gods Are Coming. A perfect blend that shows Indra subtlety for all kinds of EM. The movement progresses on a discrete mellotron breathe until the 9th minute, where a short atmospheric pause brings back the movement to its start case. It’s under intense percussions thunders and a groovy-jazzy tempo that In Search for a New Land takes its second blow. Still under the charm of the Rumanian genius, we hear the sequence permutes again to become more suave and take again its initial movement with more mordent. An excellent track where Indra shows us his ability to evolves with limpidity and ease on complex rhythms. Sinai begins with a furious sequential pulsation. An unbridled rhythm, nourish by superb metallic sound effects and a synth with Arabian fragrances which blows tortuous solos. Indra plays with rhythms and develops industrial sounds atmospheres on a musical texture of traditional Middle East spirits. A powerful track that astonishes by the spontaneity of tempos and mystifies by it exotic beauty. We hardly recover from this enhance movement that Magic Circle surrounds us with a sequential aura quite as more powerful. Nervous, a bass and biting sequential line curves a meandering movement that plays with its tempos, as flexible and unforeseeable as rollercoaster. Sometimes frantic, sometimes atmospheric, the rhythms interconnect to finish into this ball of rebellious with straightness rhythmic on trance hymns. An excellent track to ends a striking opus that will please any EM fan, as well the Berlin School style as progressive.