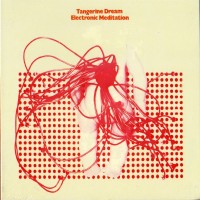 Written and recorded as the very first days of Tangerine Dream formation, Electronic Meditation is everything except an EM album. In fact we could qualify it as the first electronic punk album which was, at the start, a pure jam-session in a disused factory in Berlin in the autumn of 69. Smelling the probability of a German Pink Floyd band, Ohr’s management made it the very first Tangerine Dream album.
A sonorous bric-à-brac sprawls in a psychedelic tumult with stunning melodious passages. Deviating organ on percussions as random as celestial, Schnitzer’s cello bites in the very ambient overture of Genesis. Here the rhythm is absent and the music is abstract. TD is a quintet whose search itself and which grants its instruments before an avalanche of percussion strikes Genesis aboriginal psychedelic rhythm which becomes louder in spite of Thomas Keyserling beautiful flute. Journey through a Burning Brain get going on the cacophonous final of Genesis. Here, Edgar explores his guitars sonorities. A track which becomes more poetic, with a very Floydian savor, thanks to an organ biting Froese incisors guitar strings. Hallucinatory and rather incoercible after a good joint! Ambient sonorities oscillate between skidding organs which are straightened up to that ghostly sinuosity, Journey through a Burning Brain blazes up on a flexible and discordant rhythm where guitars spit a rock'n'roll venom on a surprising Schulze percussions play whereas the flute founds a jungle climate. Completely crazy, but surprisingly attracting, Journey through a Burning Brain equals Pink Floyd’s Ummagumma sessions. Cold Smoke is hallucinatory smoke worthy of LSD trip. Sweetie intro with a gliding organ, the track is constantly dazing by dry strings of a delirious violin and demonic Schulze on drum, whereas the organ remains always placidly harmonizes with a solitary quest, excludes quintet disharmonies. Odd and anti musical it still has good passages, especially when Froese’s guitar solos tear the wall of steel in a delirious innovating pre progressive. To tame but quite gently!
Ashes to Ashes is a kind of psychedelic blues distorted by Conrad Schnitzler machiavelic spirit, excellent in the art of working strange sound effects. Resurrection buckles the loop with a very pastoral intro which floats in delirious vocal, before taking again a sinuous and lazy heaviness, molding the intro of Genesis.
For a first album, Electronic Meditation is not that easy to tame. One told me that it’s a cacophonous symphony that I would agree. On the other hand one clearly feels the influence of Pink Floyd from Saucerful of Secret and Ummagumma eras. But deeply in the details, we clearly hear Rubycon and Phaedra first steps.