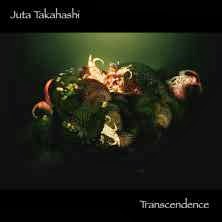 A mixture of voices and breezes of ether are blowing into some fine shamanic particles of which the brilliancies, discreetly jerky, open the twilights of "Higurashi". A long and sinuous lamentation of a synth with the harmonies strangely sharpened is piercing the blackness, opening the gap of a mesmerizing ambiospherical movement where dances this lament through a field of sound particles as iridescent than the morphic singings from discreet choirs. A fine line of piano loses its fragile notes here. These notes go and come. They get lost and find themselves in an intense contemplative sound broth, wandering such as the spectres of a melody defeated on a meditative battlefield.
Meditative! This is the term closer of reality to describe the 10th album of the nice Japanese esoteric bard. But those who know the music of Juta Takahashi know how much he can be precise in his quest to build a music of meditations intensely introspective. And “Transcendence” transcends the usual frontiers of ambient works by offering a clearly more musical approach. Weaving ambiences as much celestial than deeply shadowed by rushes of blurred emotions, Juta Takahashi favors a fascinating musicality which breathes through the various harmonies of the synths from which the radiances of the layers charm the translucent silences. We have the vague impression to attend at an ambient duel where the white eats away at the outlines of a black which is never completely of ebony. And this is simply exhilarating.
And we hear this on "Maitrï" which borrows a bit of the romantism of "Higurashi" by scattering crystal clear chords in a wrapping shroud of relaxation. Some dense mellotron pads, which roam everywhere throughout the four verses of “Transcendence”, exhale sighs of violins which float as blue clouds in a sonic firmament constantly torn between the musicality of the dreamy violins and the cloistered hummings which spread a veil of astral blackness. There are a lot of depth and feelings into "Electronic Nirvana", a piece of music as much puzzling than mesmerizing with oblong sinuous waves of which the resonant contours, disguised like soft perfume of sitar, are winding the breaths of a synth to weeping breaths which sound like sonic ectoplasms from the Martenot waves. One eventually ends to forget the scrapes to tones of sitar to let ourselves be submerged by these very melancholic synth breezes. The title-track is the most impressive and the most musical of this last album from Juta Takahashi. We hold onto the first synth wave and we let ourselves derive throughout the winds and breaths of Orion in an intense ambiospherical magma where the singings of celestial bodies are the rustles of our reflection. It's intensely entrancing and we have this fascinating impression to float in a cosmos which grasps the oceanic depths. That is just showing that everything is inter connected in the superb universe of Juta Takahashi and whose “Transcendence” is the most imposing work to date. A wonderful album of meditative music!
Sylvain Lupari (October 9th, 2013)
http://www.gutsofdarkness.com/god/objet.php?objet=16441
Publié par Sylvain (A.K.A. Phaedream) Lupari à 06 h 09