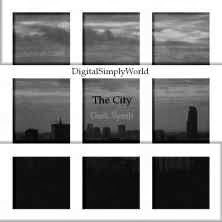 Here is an album which kicks up a fuss on the Internet. I haven't so much information about DigitalSimplyWorld. It's seem to be a musical project out of Poland from an artist who remains rather discreet and who produced something like 3 or 4 albums on the Internet since 2011 or 2012. “The City Dark Synth” is an audacious musical project which is inspired by the second portion of Blade Runner, where Decker and Rachel are in search of an elixir to prevent the expirations of their life. And, so much to say it straightaway, even if his designer boasts of wanting to give a wink to Vangelis, he aims rather at the sinister atmospheres of Ridley Scott's cult movie of by targeting the lugubrious ambiences of a civilization connected up on artificial breathing apparatus.
Powerful clarions of a nasal synth open the first seconds "The City Dark Synth". From the first breaths of synth, the listener is dive into a dark universe where wanders a scent of devastation. Pulsations come to bear this intense lugubrious mood and draw a hypnotic pulsating rhythm of which the fine variances are smothered by the strength of the synth strata and of their apocalyptic breaths. The rain settles down and chases away the rhythm while we cross the industrial districts of "The City Dark Synth". The main strength of “The City Dark Synth” is this powerful atmosphere which surrounds the story where we really have the impression to be in a police state. The rhythm is otherwise rather discreet, almost absent, but the atmospheres and the sound effects are intensely wrapping, especially with headphones. The rain, the rustles, the wandering steps and the life emptied of its spiritual envelope are tangible and are encircled by the metallic breezes and these clarions which seem to howl from these flying cars from the constabulary strengths. DigitalSimplyWorld plays with his moods, mixing despair and hope in a musical envelope on the verge of obsessive fear. The 2nd portion offers a short structure of rhythm, as a breathless running where our two dark heroes seem to have found what they looked for. But still there, the somber atmospheres which envelop this brief moment of calm let us think of the opposite. A little as in the movie! Nope?
“The City Dark Synth” from DigitalSimplyWorld is a sonic experiment that leaves an indelible imprint in the ear. The unknown Polish synthman succeed in creating a surrealist atmosphere which marries with wonder the futuristic visions of a cult movie. It's intensely ambiospheric with a heavy industrial tint which is going to appeal to fans of claustrophobic atmospheres. It's worth the try!
Sylvain Lupari (October 7th, 2013)
http://www.gutsofdarkness.com/god/objet.php?objet=16440
Publié par Sylvain (A.K.A. Phaedream) Lupari à 05 h 53