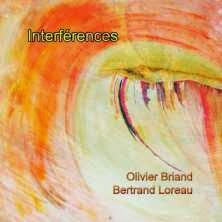 Let's imagine goblins doing ballet bare feet on an ice-cold pond. Imagine the end of their toes brush the ice-cold surface. Their movements are as soft than keen. By refusing to freeze their feet, they spin around with a stunning grace in interlaced movements. Here you have the attractive structure of the rhythms of “Interférences”. It's within a few days only that Bertrand Loreau and Olivier Briand took up the challenge to compose a music completely inspired of Berlin School and dedicated to their friends and collaborators of the French electronic movement Patch Work Music. Drawing deeply in the heart of their influences, which pass from Klaus Schulze to Tangerine Dream while passing by Tim Blake, the duet of Nantes affixes a unique musical signature to an album which distances itself so much by its structures rhythmic and morphic that by its musicality.
We feel the perfect symbiosis between two musical universes of which parallelisms are intertwined indisputably as soon as begins "Interférences Part I". The first lost chords which ring in the void are from Olivier Briand. If the movement of sequences which softly skip on a suave bass line is the privilege of the structures from both Briand and Loreau, the sheaves of synth which spurt out along oniric harmonious singings are borrowing mesmerizing Olivier Briand's cosmic corridors. This is the start of a splendid album where Bertrand Loreau's romanticism flirts with the more progressive atmospheres of Olivier Briand. And this influence of Briand over the musicality of Loreau is clearly significant in "Interférences Part II" which is a long ambiospherical track whose restraint impulses can remind us the introduction that Tangerine Dream have weaved to start Stratosfear during the 1986 tour. That does awaken some vouchers and beautiful souvenirs. Listen to it closer and the memories will pop out. The soft musicality of Loreau resurfaces on "Interférences Part III". A superb piano pierces the opacity of a meshing of heterogeneous tones to make sing its notes like a strange celestial harp. The delicate harmony is joined by a movement of sequences which hiccups of an attractive incongruous melody. The structure of rhythm limps in the ear with a lead line which zigzags whereas another one is skipping in order to avoid of wedging its staggering keys. These two structures flow against current under a duel of synths which waters abundantly this baroque movement of fine solos with twists and tendrils as much acrobatic as harmonious. I often make an analogy about the musical duels of both accomplices from Nantes and this can't be more convincing than on "Interférences Part IV" and these exchanges of soloes which rage on a superb structure of rhythm fed by sequences which fidget furiously of their analog tones.
Nostalgic of the Body Love years from Klaus Schulze; "Interférences Part V" is for us! The movement of sequences is fluid and skips harmoniously in the vapors of a synth to the dreamy solos. Another line of sequence comes along and draws this melodic wandering passage which structures the morphic rhythms sieved of seraphic voices and of mystic spindrifts from the very beautiful analog years of Schulze. "Interférences Part VI" slides in the soothing finale of "Interférences Part V" and made us taste this strange sonic universe of Olivier Briand. And this time, the duet of Nantes plunges us into the harmonious structure of Tangerine Dream's rhythms and of this magician of sequencers that was Chris Franke. And the union of both recollections of the duet is melt to kiss a lunar structure of rhythm closer to Schulze's. In fact, it's like if Schulze and Tangerine Dream would have composed a piece of music together. "Interférences Part V" and "Interférences Part VI" are the core of “Interférences” and one of the most beautiful passages in EM of the Berlin School style this year. "Interférences Part VII" hangs on to our ears with a peaceful opening which reminds me the delicate approach of Yes in Soon from Relayer's Gates of Delirium. The synths shed tears which make cry choirs reciting in melancholy while that quietly stamp the sequences which wait that the pond thaws to make run the end of their keys in a furious spheroidal ballet. And it's the symbiosis of the opposite sonic entities of the eclectic duet which makes the charm of this long track which falls over between the poetry and the dissonance of the senses, witnessing of this beautiful duality between the poetic and theoretical universes of Loreau and Briand. Except that everything fits together and ends to give a long track where sequences romp about on the spot, being of use as a bucolic rampart to synths which release choirs, harmonies and solos, confirming that these two artists to the approaches which are connected as twins from different mothers can be, can create an electronic symphony freed from any constraints.
“Interférences” is a superb album where Bertrand Loreau and Olivier Briand found a timeless breach to infiltrate the unexplored corridors of retro Berlin School. The duet of Nantes uses wittingly the sources of their inspirations and the ramifications of their disparities in order to offer an album where the soft morphic rhythms are kissing to full musicality some synths with always lyrical harmonies. An essential for those who like Berlin School of the analog years.
Sylvain Lupari (October 1st, 2013)
http://www.gutsofdarkness.com/god/objet.php?objet=16433
Publié par Sylvain (A.K.A. Phaedream) Lupari à 21 h 40