“From Tangerine Dream to Jarre, by passing by Vangelis, Holocaust 3000 shines of its 20 minutes in a mixture of explosive and ambient EM” 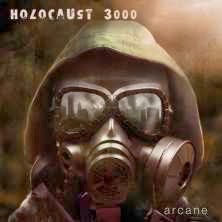 An EP from Arcane? Eh...well, I would say that it's better than nothing! After a mega strong album in A Tale of Unease in 2012, Paul Lawler comes back titillating our ears with an EP structured around strong apocalyptic impressions. Standing solidly over two ebullient tracks, among which a very explosive one, and a long ambiospheric with a great scent of apocalypse, “Holocaust 3000” is a splendid in between where Paul Lawler dives into the heart of the sound storms of the infernal period of the mythical Arcane.
Straight from the start, "Minutes to Midnight" opens this new mini musical adventure of Arcane with a strong line of sequences which makes swing its keys into a crazy oscillating race. The rhythm is hard. Wrapped of silky synth layers, it stands firmly on robust bass pulsations and jingles of cymbals which draw the lines of a huge electronic rock. And Paul Lawler adds more with another line of sequences which flits around punchy percussions. In fact, describe "Minutes to Midnight" is an acrobatic act because the tempo runs faster than the words. The percussions hammer a furious cadence while that other chords buzz and spit of intense hummings in the fragile harmonies weaved by a synth in the charm as apocalyptic than ghostly. I cannot refrain from making a link between Mark Shreeve and his Legion with this explosing track which makes us pass by all the range of emotions, so much it is rock, hard but just as much harmonious. What a kicker! This is pure dynamite compressed in 6 minutes. "Holocaust 3000" respects the spirit, and the artwork, of what we can understand of this last EP. It's a long ambiospherical phase with a heavy atmosphere of contamination of the airs and where the stigmas of a cataclysm roam such as industrial ectoplasms. I have images of dark and deserted streets where is swarming a subordinate fauna filled with radioactive gargoyles in search of dead flesh, as well as images of an apocalyptic suite to Blade Runner. Especially towards the finale where the blackness gives way to a light which precedes the magnificence of a sky covered gradually of blue hope. Some creative Lawler as one pleases! "Burners" is in the same mold as "Minutes to Midnight". If the rhythm is less violent, it remains not less heavy and lively there. It also follows a beautiful evolutionary curve by modifying subtly its axis of rhythm with a good meshing of sequences, bass sequences, pulsations and percussions which structure a rhythm that the foot seizes easily. The melodic envelope is as much attractive with an approach of the 80's synth-pop in a cosmic pattern which awakens Jean Michel Jarre's souvenirs.
From Tangerine Dream to Jarre, by passing by Vangelis, “Holocaust 3000” shines of its 20 minutes. Paul Lawler structures an EP to the greatness of his talent where the film atmospheres float as invisible threats on musical structures made of concrete. An EP of Arcane? You beat! And guess what? It's more than great. While waiting for the suite!
Sylvain Lupari (October 14th, 2013)
http://www.gutsofdarkness.com/god/objet.php?objet=16454
Publié par Sylvain (A.K.A. Phaedream) Lupari à 14 h 05