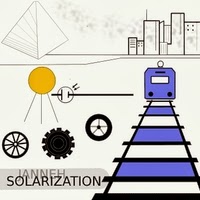 Each week brings its lot of demands so that I can write a chronicle on an album of an emergent artist. If some the EM proposed some goes away from the borders of Synth&Sequences or inspires few interests so that I speak about, others on the other hand present a very mature EM while certain artists show a strong potential and a beautiful musical signature which deserve amply that we speak about them. And this is the case with Janneh, a Finnish artist who seems clearly inspired by the rhythmic approaches of Jean Michel Jarre and those more theatrical of Vangelis. “Solarization” aims to be a mini concept album of 34 minutes about the solar energy and its importance in the story of the humankind that the multi-instrumentalist from Piikkiö, he plays as well keyboards and synth as piano and guitar and even percussions, presents by the means of 7 themes which, if they are clearly separated from each other, turn around the same delicious harmonic pattern.
The introduction of "Solarization I" plunges us into a heavy ambiospherical phase with a mixture of hollow winds and prismic drones which blow in the infinity. The percussions shake the mood which illuminates itself by a rather Babylonian musical synth and of which the wrapping layers are pouring idly over a bed of shimmering arpeggios The approach is rather pompous and kisses the soft vocal of sibylline oracles before borrowing the phases of a sober symphonic electro-pop where the solos of synths sing with some absent choirs on a line of sequences with some undulating alternating keys. I easily hear Thierry Fervant's harmonies on this first track which is a faithful reflection of what is coming all along “Solarization”. After an introduction which solicits these sequences to sneaky skips, "Solarization II" dives directly into the heart of Janneh's influences with a beautiful electronic ballad to the aromas of the 80's when the harmonies, the percussions and the synths were perfumed by Jean Michel Jarre's essences. It's a small wonder and a very catchy track. The kind which would easily played on the air waves of radio pop. The opening of "Solarization III" revisits the lines of crisscrossed sequences which opened Vangelis' Chariots of Fire. Well, the moment is brief but pronounced enough to ignore it. Afterward the music adopts a kind of languishing blues where Janneh makes melt his solos of guitar in those from his synth, which are rather catchy i got to say, on a slightly hopping structure of rhythm. "Solarization IV" presents a rather misty approach with a rhythmic skeleton which scatters its bones in an industrial ambiospherical ambience. A ghostly solo awakens a mechanical rhythm a little after the first minute. The rhythm throws its strikings of percussions which resound and smother in a rebellious structure where the synth divides its harmonies in some solitary solos, while drawing beautiful Arabian orchestrations. And Janneh introduces us into a Middle East tribal phase with "Solarization V" and its structure of rhythm which quaver in a soft serpentine stroboscopic. It's a great and solid track which gathers all the electronic ingredients that please with its chain of sequences which glitters in the background, its good tribal percussions, the guitar riffs and, especially, the superb Arabian orchestrations which plunges us into the oniric kingdom of 1001 nights. As much dreamy as melancholic, "Solarization VI" is a sad melody which scatters its notes of piano in some floating mists, such as sighs which get lost in the winds. "Solarization VI" closes this first musical essay of Janneh with an ambiospherical futuristic approach with scents of lounge jazz à la Blade Runner.
I really enjoyed this first musical rendezvous with Janneh. It's obvious that he has talent, senses of writing and a way to build orchestrations that sound so much like Jarre or Vangelis. None of the 7 tracks presented on “Solarization” is boring. On the contrary, each possesses this thing which forges musical itches. Whether it is in the rhythms, even the most accessible ones, or the floating cinematographic atmospheres, Janneh weaves a universe full of charm which says to me that the best is to come. This is a beautiful discovery which is worth its cost.
Sylvain Lupari (September 26th, 2013)