“Still Waters is a superb and a poignant musical journey, a cinematographic odyssey  that we listen with  a brain full of fantastic soundscapes and images of a youth childhood” 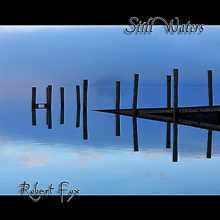 1 Persian Sunrise 4:42
2 Weeping Dragon 9:15
3 Hanuman 5:49
4 Pegasus 7:16
5 Sirens 7:20
6 East to West 7:03
7 Chimera 12:05
8 Ishtar 7:09
9 Desert Song 9:02
10 Persian Sunset 5:34
AD Music | AD120CD
Oh...Do I want to bawl. But not of these tears which come from pain. No! Tears of melancholy which invade the eyes at the same time of our memory remembers of our childhood where, quite enchanted that we were, we listened to the stories and watched the movies about the tales of 1001 nights. Ali Baba, the prince of Persia and Aladdin. You remember? Well, maybe I am too sensitive and the painkillers are muddling up my feelings, but the fact remains that the first 15 minutes of “Still Waters” are to be weep. Sculpted in the harmonious ashes of Short Stories, released in 2011 (AD593CD), this last Robert Fox's album entails us in the sound fantasies of an Arab world with a cinematographic vision from which the depth of the details are the privilege of the brilliant English composer.
Breaths of a synth orchestred in fragrances of Persian flutes rise into the air of a still sleeping continent. Across its golden breezes, which sound like a misty Ney, "Persian Sunrise" reveals this filmic vision of a city which wakes up on a sacred day. The mood is extremely ethereal with these breezes which float in a soft perfume of ether, gathering from their poignant lamentations the delicate notes of Persian sitars which crumble their contemplativity among some delicate ringings of carillons. “Still Waters” is a tribal sonic mosaic which interlocks its 10 tracks in a long musical tale where the Arabic and oriental spirits confront in a surprising symbiosis enter the astral and tribal poetry for the most delicate pleasure of our ears. "Weeping Dragon" welcomes the finale of "Persian Sunrise" by blowing some even more poignant breezes which mix marvellously the musical and poetic fragrances of two countries rich in stories and legends with a long and soft litany which would not have to redden in front of the song theme of Titanic. The flutes are superb of tenderness and onirism. Their seraphic singings are sliding in the color of harmonies where the reminiscences of a still touching Kitaro swallow our souvenirs. Tribal percussions and strings of acoustic instruments offer an ambient and dreamy rhythm by which the delicate progression increases this feeling of tearing which surrounds the first 15 minutes of “Still Waters”. It's very beautiful. And it gives the taste of weep. And Robert Fox doesn't stop filling his synths of weeping breezes. It's behind a voice taken away from the magical of electronic instruments that the first rhythmic steps are hatching. Always braided of Berber tribal atmospheres, "Hanuman" offers a delicate rhythm which skips with fragility on the caresses of fine percussions more electronic than clanic. Omnipresent and sculpting some ambiences as much touching than ethereal, the Persian flutes drag constantly the listener into these imaginary countries which breathe the vastness of the big Mongolian landscapes. As in "Pegasus" and its impressive flute/violin duel which cries on a fine movement of hypnotic sequences and the very beautiful "East to West" which is a melodious gypsy ballad with a huge zest of oriental perfumes à la Vangelis on a slightly hopping structure of rhythm. The piano and the seraphic voices add a cloud of melancholy which amplifies the distress of the Chinese violins. Robert Fox's mise-en-scene on these tracks is astonishing. We can't have a spiritual vision as much cinematographic with these rhythms which grow without bursting, shaping a storm which is trapped in poignant tearful harmonies.
Moreover, each track from “Still Waters” offers this fascinating duality between the ambient tribal rhythms and the melodies weaver of tears. We break into pieces in front of the deeply moving "Sirens" and its voices of oracles which are hanging in the air such as vapors of bewitchment. After a daydreaming intro which hesitates to release the chords of its poetic and theatrical rhythm, "Chimera" drains its 12 minutes with a structure of rhythm which is similar to those sonic landscapes which accompany those documentaries on the Oriental world. Robert Fox weaves a tribal universe to make dream with chords of a fanciful Persian guitar, angelic choruses and voices of oracles of sands which sprinkle a universe where the filmic rhythm merges to its atmospheres as ethereal as meditative and heart-rending. "Ishtar" brings us to another level. It's a beautiful down-tempo erodes by the dust of sands where the oracle of deserts offers his litanies to a synth and its piercing Persian breezes. We are in the universe of Alquimia and of her magnificently ethereal voice. "Desert Song" offers a slower rhythm. A slow tribal dance tempo where this time it is voices of men that chant over some delicate tribal percussions from which the hypnotic beatings bring to the skies the laments of dreamy violins and the sweet breezes of flutes and their sharp harmonies. "Persian Sunset" loops the loop of an album intensely poetic where Robert Fox completely subjugated me with 75 minutes of pure delight.
AD Music's press info quotes that “Still Waters” is about Robert Fox's best opus. One says this to each of his new albums. And nevertheless, it's true. Robert Fox has this gift to surpass himself in a crenel which is very difficult to excel; New Age. One exaggerates and this is melodramatic. We are lacking of juice and this is insipid. And if we aim justly, this is theatrical, soft and moving. It is a musical story that we listen to with full of images inside the head. This is “Still Waters”.
Sylvain Lupari (August 31st, 2013)
http://www.gutsofdarkness.com/god/objet.php?objet=16366
Publié par Sylvain (A.K.A. Phaedream) Lupari à 17 h 12