“Now, here is something totally bewitching! Homophony is a pure delight of hypnotism where sweet earworms proliferate in a musical decor as charming as surrealist” 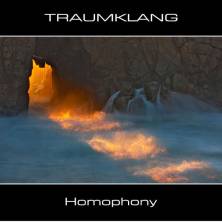