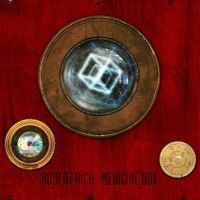 Robert Rich always succeeds in creating a musical world where emotions and spirituality feed beautiful contemplative structures. Following the precepts established on Ylang, the American synthesist offers in Medecine Box a meditative album where ancestral rhythms beat on a skilful fusion of more contemporary instruments and sound samplings. Making so, he offers 9 very beautiful titles with stunning tribal atmospheres which are rocking between the ambient and soft rhythms, at once hypnotic and progressive. Here is a journey in the heart of countries without borders, there where reign a bewitching shamanic karma.
A rich mixture of wave-like pulsations, smooth bass notes and hand percussions open the very fluid rhythm of "Alba". Guitar riffs get stick to this quiet structure, throwing a soft jazzy veil and opening the way to superb floating solos which whisper, such as spectral laments, over these captivating tom-toms. With its peaceful rhythm, which hooks from the first listening, "Alba" introduces us into a musical universe rich in subtlety, both in kinds and tones. The rhythm of "Kaaruwana" is more ambivalent. Between the élans of pulsations/percussions which tumble into felted lanes and a certain restraint in a tremulous approach imposed by the soft angelic voice of Cheri Chuang, "Kaaruwana" displays a more ethereal mood, even supranatural, which is bitten all the same by a beautiful bass filled of juicy notes. This ghostly mood overhangs all over the album and this no matter the rhythmic approaches. "Macula" presents a very beautiful musical pattern with lascivious percussions of which the strikings seem frozen in time and resound among layers and ethereal voices, drawing an at once spectral and intriguing atmosphere. The piano in it is as much discreet as magical, displaying a nice meditative melody and re-covering of its melancholic notes a structure which is near an astral trance. It’s a very good title on this Robert Rich's last opus which weaves a beautiful musical painting where bird singings, xylophones of glasses and weakened cymbals decorate a world without borders. "Crepescule" is about in the same register, except the flutes bring a more poetic and clanic key touch. "Cornea" transports us in the mysteries of New Orleans’ bayous with a nebulous rhythmic approach. The bass is slow and coos beneath strikings of percussions to abstruse tones while the harmonica blows a black melody quite as much vague there. As a kind of Western with dark jazz tendencies.
Soft blows of a pensive flute open "Pollen". Aboriginal tom-toms offer a soft unstable rhythm that the pleasant meditative voice of Cheri Chuang wraps of a mesmerizing spiritual aura. The bass is delicious and bites delicately into this bewitching rhythmic which gradually wriggles on good riffs, more and more anxious pulsations / palpitations and solid knocks of hands percussions, guiding "Pollen" towards another intense spiritual trance. That’s a very good passage on Medecine Box where the bass resuscitates old souvenirs of certain Patrick O' Hearn. A small jewel! Fitting to this model of crescendo "Callyx" is also delicious with its percussions which espouse the knells of carillons and its layers of spectral guitars. Moulded in the paths of "Pollen", voice in less, "Salamander Quay" remains dark and very ambient. The ambience is heavy and enthralling, a little as an intense Amerindian incantation, where circulate nice fragments of melodies wrapped in the silks of flutes or pianos. Melodies lost inside a structure soaked of a shamanic magnetism aura. "Helios" closes this Robert Rich's last opus in a magnificent musical pattern which depicts all the facets of Medecine Box. Breaths of flutes float over a mixture of percussions and pulsations. This shamanic intro is getting alive bits by bits on the strikings more and more fed by the percussions / pulsations which drum to the rhythms of fine tribal trances. Carried away by the breaths of flute and the languishing élans of cello, the rhythm of "Helios" progresses in a beautiful crescendo of emotions and hypnotic rhythms before falling on meditative and ambient ice floes. The angelic voice Cheri Chuang resurfaces. Her breaths are mixing to celestial voices and layers, sweeping the sinuous reverberations and quieting down the tribal ardours with a soft paradisiacal incantation.
Medecine Box is a beautiful poetic album. On ambivalent rhythms and misty atmospheres, where the mythical American folklore is soaked by a fascinating shamanic aura, Robert Rich weaves a mesmerizing and fascinating musical universe. Like on Ylang, Medecine Box is at the antipodes of cerebral beauties with its intriguing atmospheres as much spectral as supranaturals and its breaths of ancestral spirits which sing beneath the cover of a contemporary music technology. The result is surprising of beauty. A beauty of which the essence increases as we are letting ourselves subject by the lyrical charm of Robert Rich.
Sylvain Lupari (2011)
Cet article est disponible en Français sur le site de Guts of Darkness, dont je suis chroniqueur sous le nom de Phaedream: http://www.gutsofdarkness.com/god/objet.php?objet=14790
* If you want to know more about the exotic world of Robert Rich and hear some MP3 snippets, you can visit his website here: http://robertrich.com/