''Dreams and Distant Moonlight is a great blend of progressive rhythms to atmospheres as much cosmic as ethereal..'' 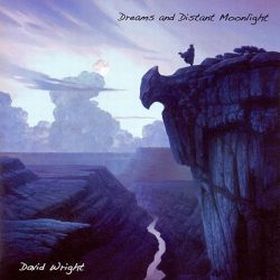 1 Procession under Moonlight (1:47)
2 Dreams (2:53)   3 Velvetude (3:07)
4 Just an Illusion-Part I (6:49)
5 Just an Illusion-Part II (4:45)
6 State of Peace (1:14 )
7 Cry to the Moon-Part I (4:31)
8 State of Confusion (4:27)
9 Cry to the Moon-Part II (3:37)
10 Heatwave in Blue (8:02)
11 Amorphous (7:58)
12 State of Bliss-Part I (4:53)
13 State of Bliss-Part II (6:43 )
14 Sun Dust (7:28)  15 The Canyon (8:44)                AD MUSIC: AD64CD
For his 19th opus David Wright surrounds himself with 2 long time friends from Code Indigo; Andy Lobbam, whose guitar floats above Pink Floyd musical fragrances and Nigel Turner on bass. The result is a superbly harmonious album, as David Wright knows how to build them, with an audacious zest of a progressive music captured into beautiful orchestral arrangements and intense wrapping mellotrons which come to take the last ounce of repressed emotion. Composed of 15 titles linked in 2 musical acts Dreams and Distant Moonlight is a great musical rendezvous of which the rhythmic and atmospheric premices are between major works such as Walking with Ghosts and Momentum as well as more progressive works of Code Indigo.
"Dreams" emerges out of the celestial introduction that is "Procession under Moonlight". The atmosphere is romantic with a splendid piano of which notes espouse the beauty of a sunset. A composer who can be complex, David Wright is above all a poet of a music without words where chords and arrangements are the equivalence of musical odes. We can feel it! The English synthesist is imprinted by a melancholy which will be reflected throughout this 1st phase of Dreams and Distant Moonlight. "Velvetude" pursues on the sweetnesses of "Dreams" with suave orchestrations and a mellotron which frees feminine lamentations on a tempo which goes increasing on sounds of fine percussions, just before pouring into "Just an Illusion" and its synth to spectral breaths. It’s at this stage that Lobbam and Turner make their appearances. The beat is curt and jerky by riffs of a sober guitar, but what amazes the most is the play of synths and keyboards. Through the solos which come from everywhere, Wright shapes composite tones which draw an effective sound paranoia on a title which could very well make Pink Floyd repertoire in particular because of the guitar of Lobbam and his juicy solos. "State of Peace" brings back the rhythm to it start with a short atmospheric passage as on "Procession under Moonlight". "Cry to the Moon-Part I" follows the musical tangent of "Just an Illusion". Orchestrations are great and are tie to a synth as honeyed as ghostly as well as felted electronic percussions flitting around a superb mellotron which waltzes with softness on its hybrid tones. "State of Confusion" is stronger with a synth of which metallic serpentines awake the riffs of a heavy guitar. It’s a strange title which crosses oriental tones on a big progressive rock. Still there, David Wright fills our ears to the rims with superb arrangements and sound effects which strike hard through a synth with twisted solos which lead with heaviness in "Cry to the Moon-Part II" which is sharply heavier and this even with a synth of which the minimalism melody goes alongside in a heavy musical explosion with Andy Lobbam's wonderful guitar.
"Heatwave in Blue" goes out of the progressive melodious context to lead towards a more atmospheric territory. David Wright is one of the rare artists able to create rich and tangible ambient music. David Wright is one of the rare artists able to create rich and tangible ambient music. One would believe being in a desert of space-cowboy with a lonely rider who ride on a fuzzy rhythm to pulsations from a bass line filled of increasing curves sound effects of light clogs. We are floating in a beautiful atmosphere filled of cosmic sounds effects à la Schulze, a synth line with chords of a country guitar and dark breaths of an austere mellotron. A light piano lights the flames of "Amorphous" with dark and nostalgic notes. A zigzagging rhythm imprisons this piano which will travel in a nervous and jerky rhythmic progression, wrapped by feminine choirs, synth loops and waltzing mellotron layers. "States of Bliss" offers a gloomy intro with a piano and a forsaken guitar which complains in oblivion before gliding towards a 2nd more rhythmic part with a very nice percussions play and a synth full of Middle East waves. This is another great title. We can establish a parallel between these 2 last titles and "Sun Dust" as well as "The Canyon", except that "The Canyon" is as heavier as melodious with a sensual approach built on great orchestral arrangements and a superb guitar which winds around a striking mellotron.
It’s a strong title which concludes an album splendidly well produced where David Wright left nothing at random. On the contrary, Dreams and Distant Moonlight is a superb production with a great blend of progressive rhythms to atmospheres as much cosmic than ethereal which bring us undeniably at the doors of his sublime masterpiece; Walking with Ghosts. It’s completely indicated for those who seek in music an antidote to coolness wintry... There again, I exceeded my 30 lines!