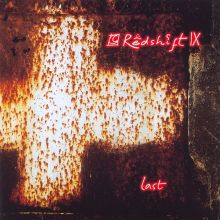 In this artistic universe where technologies constantly modify the essence of EM there are elements which remain immutable, like the mephistophelic sonority of the mythical Redshift. Even with a modified band structure, following the departure of James Goddard and the addition of Ian Boddy, Redshift remains a dark and eclectic band filled of a boiling music bruised of a melancholic imprint. Recorded live at the October 2006 Hampshire Jam, the new EM trio explores meanders of Mark Shreeve heavy analog paths. Except that this times the structures are filtering melodious inputs, a strange contrast of an obscure music.
As soon as the cavernous intro of Tormentor can be hear, the atmosphere fills up of heavy reverberations from the analog monster which is the enormous Mark Shreeve synth/sequencer. Sound stigmas are escaping, purifying an atonic atmosphere from its unpredictable trembling. A little as on agony, Tormentor progresses of multiple ascensions tormented by hybrid pulsations which form bubbles of restricted explosions. The movement is slow and sinuous containing a sustained violence which abounds of spiralled melodies, moving and disappearing like frightened snakes. This is some nice spectral Redshift with spontaneous musical effusions as we always like. Vaporous on synths filled of intriguing drones, Nightshift forms a musical ascending curve to the astounding following track; Last of which the intro is reflecting a counting rhyme from horror movies with its arpeggios multiplying in a minimalism echo. The atmosphere is lugubrious and drained by synths concerned in creating a pure diabolic effect. The tension is superb and the sound arch contracts with plasticity to offer a dark melody which is breathing with a bewitching ease. The sequencers play is, as usual, superb and the Shreeve brothers extend a series of harmonies which dance with an echoing flexibility that leads to dreams. It’s a beautiful moment, soft but imprints of a dark beauty, because of the undertow effect of Redshift waves.

Long Way Out criss-crosses with hesitation until Damage, by far the most interesting track on this Redshift 9th opus. A nebulous intro, with sequenced progression, frees spectral lamentations which are rolling up in threatening striations. The sequences are rebelling to form a contracted and undisciplined fusion of rhythms. Suddenly, the heavy Moog monster of Mark Shreeve grubs this intro to redirect the cadence on increasing nebulosity in a sea stagnant of complex sounds. The Redshift effect is total and is impregnating with a worrying silence, of which only some elements float in a poetic blackness. Dronings are coming back to oversize this quiet constellation. Rhythms are getting into panic around more vicious sequences which twirl around as a neurosis can feed a brain. Passages of the English trio are impetuous. Even if we can fell what’s coming up, impulses always astonish by the strength of its sound impact and its evolutions. Torn, which follows a frantic ovation, offers the same sound concept. Except that sequences are more agile, frivolous and bite the hearing of a Redshift ferocity which never satisfies our hunger.
This last Redshift is lashing and corrosive, more than Toll if possible. The arrival of Ian Boddy seems to coincide with a melodious opening of wild sequences. It’s a paradox which constantly floats in a baleful and doomed complex circle. Let just hope that this evocative naming of this last opus doesn’t mean what it could be.