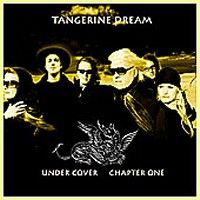 Is it another element to fatten all those legends revolving around Tangerine Dream or simply an easy explanation to justify the intrusion of Froese and Co in the very easy world of synth-pop? However Under Cover - Chapter One is the result of a bet between Tangerine Dream’s members and one of the Los Angeles concert’s promoters held at the end of 2008. The idea was to see if Tangerine Dream was able of playing rock music (And what about Rockoon?). But not any kind; reprises of some biggest pop songs of the last years! The stake in the bet is a long ballad L.A. / Vegas for each of Dream’s members if the group failed and, in opposite case, the mysterious promoter would have an interesting proposition on the table for the band aged more than 40 years. Well....is it a myth or reality? Let’s hope that the offer was worth it because Under Cover - Chapter One is a perilous incursion in a very melodious musical world where passion, words and vocals have a direct incidence on the quality of these hits. Fafans of TD I already see you frowning. But do not worry, even if Edgar has to possess one of the most complete and sophisticated studio (we remember that the purpose of all these reeditions, remasterings and soundtracks was to build a studio at the state-of-the-art technology), Under Cover - Chapter One is an average album with a strong commercial potential where I dare to believe that the promoter respects its part of the bet. But there is something that’s annoying me...
The album opens with Cry Little Sister, a 1987 strong hit pulled out The Lost Boys’ soundtrack. It’s a good rock doubled of a nice ballad and the Dream approaches it such as, a bit as a copy and paste with good riffs but quite fade percussions. If guitars and sequences are good, the rhythmic portion is cold and without big depth and this is Under Cover - Chapter One big weakness; if sequences, keyboards and guitars are aptly returned, the voices and rhythmic structure are weak and very far from improving (isn’t the idea behind every interpretation from a track written by someone else?) the original version. I like Everybody Hurts’ version. The piano, synth strings and Chris Hausl’s vocals give a more intimate version than the original. I don’t know Precious from Depeche Mode, but I vaguely have the impression that this interpretation misses punch because it’s sounds strangely as Cry Little Sister's version and Forever Young. I salivated at the idea of hearing what the Dream would make with Space Oddity and I got a bitter disappointment, in spite of dazzling guitar solos. I don’t understand why the gang of Froese wants so much to give a rock and techno-pop approach to this avant-gardist track. I expected more and with good reason, considering the enormous potential of the musicians present there. Idem for Hotel California which, except for guitar solos, is a version that misses imagination and feelings, quite as Iris which is a very beautiful song returned here with an anemic performance. Yes the guitar is beautiful but the emotion is not really just in time.

Heroes is another deception where I have the feeling that it’s reproduced on a single chord or riff. Quixotic violin strings didn’t throw any feelings and the voice of Hausl is not as half Bowie’s emotions. In these cases I tell myself, I know that I am not a musician, we should play on structures, sequences and rhythmic depths. In place, we have a Heroes that will fit to elevator or market music. On the other hand The Model is completely brilliant and really fits to interpretation category. Here, there are no electronic rhythms or synth-pop, but a beautiful ballad played on piano where Hausl’s voice is caressed by nice orchestral arrangements and suave flutes. It’s a very nice and surprising interpretation. Sorry but I don’t like this new version of Wicked Game which here is takes the shape of a big techno pop with a voice that shows some limits (and we all know that Hausl has a powerful voice) on a structure which copies too much the empty and sanitized rhythms of the Dream post electronic Berliner years. But there aren’t only deceptions; Suzanne is very beautiful interpretation with a little more pronounced rhythm and a voice surprisely just from Thorsten Quaeschning who gave me the taste to rediscover the original, idem for Hallelujah which is bursting of emotion and melancholy. Recorded live, Norwegian Wood is a strong version with a heavy and minimalism rhythm and a superb amalgam of guitars, sitar tones and synths with strident wanderings which wrap quite well Quaeschning voice. Wish You Were Here? Bah... I am outraged. If the piano on it is nice and twinkling chords add a new dimension to this Pink Floyd classic, I still don’t understand and feel the need to add a touch of livid synth-pop. I’m telling myself that before attacking such a classic, you better be provided very well on imagination and obviously Tangerine Dream looks as he has a pretty high level of lack here and among other tracks in this reckless adventure.
Did T. Dream win his bet? I wouldn’t say it. If Under Cover - Chapter One has a rock touch, it’s not an electronic rock one but rather some light synth pop played on electronic equipment. I can’t deny the presence of heavy riffs and sequences, except that these elements are torpedoed by an anemic structure faithful to what Tangerine Dream produces in its last years. Yes there are good moments, but there is so much potential behind the vast majority of selected tracks that we can only be disappointed by the very rash and symmetric approach of the Dream, which has not the boldness of the potential of his equipments. In fact I have the feeling that Tangerine Dream approached this challenge sat on his reputation and effortlessly with an edifying artistic detachment.  And what’s annoying me the most? If there is a Chapter One, does this means there will be a Chapter Two? Who would dare such a bet? And if ever it’s Stairway to Heaven that goes in the wringer!