After Aurora I continue my discovery of Ian Boddy's charming musical world with Elemental. A different album, because more down-to-earth and less cosmic, with a more rhythmic and just as much melodious approach, Elemental offers 8 tracks which are linked and teem with a rhythmic life halfway between Arc and the very eclectic, sometimes industrial universe, of the English synthesist. A very nice album that makes us discovers another facet of this pioneer of contemporary EM and founder of DiN Record. 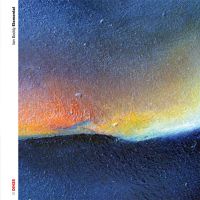 Never Forever begins this new musical adventure with fine and twinkling arpeggios of which the echo is hiding into slow synth layers that waltz and entwine around a delicate melodious mellotron mist. Nice and short Never Forever frees its last notes in the nebulous oceanic intro of Stormfront where hesitating pulsations from a heavy line of bass draw a rhythmic which staggers besides chords of an electric piano. A soft mellotron fog wraps this uncertain tempo, a little as the mystic universe of Arc, and floats above these e-piano chords which dance of a crystal clear and random pace, conferring to Stormfront an at once melodious and mysterious ambiance. A fine metallic shower unite Stormfront to If all the World Was Blue, a long track to hybrid ambiances which crowned the intro of Stormfront. Foundry is as much brilliant as delicious. A cooing line of bass encircles an intro to metallic sonorities. Quite early, percussions and a syncopated sequence mould the bass circle and shape a surprising rhythmic dipped in steel and which waves among nice melodious chords. Percussions strikes with anvil resonances strew the lively cadence of Foundry of which the insistent tempo is wrapped with nice mellotron pads, always dressing Boddy music of a mysticism and bewitchment aura, before falling in its finale with floating industrial ambiances to join the very ambivalent Reflex.
Emerging out of a slow intro stuffed with metallic tones and scattered percussions, Reflex is waking up with a hypnotic pulsating beating, flickering cymbals and a soft mellotron synth which wraps these strange metallic percussions which unfold with a stroboscopic approach. The tempo slow, encircled by a nice line of bass of which the vibrating oscillatory pulsations espouse a superb line of synth with subtle spectral lamentations, Reflex evolves quietly on a supple cadence fed by a pleiad of electronic and metallic tones before merging in the very ambient and atmospheric Flow and its floating synth layers. Although less heavy, All Roads Lead to Home is a crossing between Stormfront and Reflex with its uncertain rhythm which oscillates between hypnotic strikes and pulsations that make feet trample and its fine melody forged in delicate crystal clear chords. Fine pads roam in oblivion whereas twinkling arpeggios swirl delicately on Elemental opening. It’s a very nice cosmic Bolero where hatched chords are grafting to this dance of stars. The rhythm is getting heavier and becomes more dramatic with its percussions which roll beneath a sky streaked with synth layers which illuminate a dark astral procession. It’s a very nice track that crowns another Ian Boddy's finest album which definitively deserves that we discover this artist for whom the name seems more known than its immense skill and wonderful music.