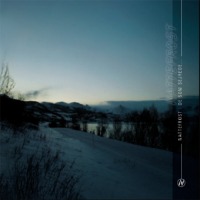 Nattefrost dazzled the small world of EM, Berlin School style, when the superb Absorbed in Dreams and Yearning hit trays. Since then his first works are surfacing and we discover an artist who likes deep and peculiar atmospheres. De Som Sejrede, which means ‘‘Those who Conquered’’, is an opus with a Scandinavian character. A bit like a fable, or a legend of the Scandinavian country, Nattefrost draws a musical story with stunning orchestral arrangements. I’m thinking of I krig, which recalls the Vikings age, Sværdet where the Nordic synthesist shows his ability to dress a minimalist line and to Nattefrost track. There is a dark side, even lugubrious by moments, all along the opus. Like a movie soundtrack from a medieval time where dark spirits dealt with Salem witches.
Mod Lindisfarne starts the story with a dark and heavy sequence witch floats on an intense minimalist tempo. Slowly the synth spreads its layers and becomes superbly enveloping with intriguing spectral choirs. Sejlende Gennem Dybe Dale’s tempo is slow and moves on hammering percussions. Like those we hear on old galleys in order to stimulate the oarsmen. These percussions hammer a heavy rhythm surrounded by an extremely invading synth. Slaget Som Varede Evigt is the longest track on Bjorn Jeppesen first known opus. A good healthy sequence opens the road to the first version of Absorbed in Dreams and Yearning’s opening track, The Battle that lasted Eternally. Here the movement is slower and is penetrated by bewitching synth, adding a bit of sensuality. A good track, whatever his musical forms. Simply great, I just can’t get over it. Stormende Mod Fjenden borrows the paths of the Phantom of the Opera with its huge church organ and hammering percussions. An organ sound that we also find on the hammering Mit Hedenske Blod. Tårnets Krigere has definitely a more serene approach. The keys are clear and nervous flying with constancy, creating an echo effect a little as we find on Philip Glass’ works for piano. Vintersolhverv concludes on a more ambient note, at the borders of a Berlin School filled by spectral moods.
De Som Sejrede is a work clearly different from Absorbed in Dreams and Yearning. It is a highly atmospheric opus, with good sequences, which we listen like we listen to a movie soundtrack. It is a musical journey through the histories of a darker Scandinavia than we use to know. The structures and arrangements are superb and require some listening. It’s a sign of a work that has a certain depth.