NATTEFROST: Absorbed in Dreams and Yearning (2006)

Nattefrost is Scandinavian musician Bjorn Jeppesen. And with Absorbed in Dreams and Yearning he crosses the Denmark borders to presents us an opus tinted of new sonorities. According to the press guide, it’s an innovative work that could leads us towards a new EM style; the Scandinavian School.A quotation that has something to prick the curiosity of fans of this music kind, of which I. So let hear how it’s sounds. 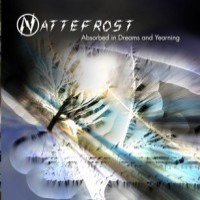 The Battle that Lasted Eternally begins with noises of gladiators combats and horses neigh which rage on a round and nervous sequential line to subtle undulatory oscillations. A bass sequence among which chords in loops and nervous pulsations inspire a very harmonious synth which whistles, on a soft fluty sonority, a suave melody which is dandling among shooting streaks and strata while adjusting its octaves. The Battle that Lasted Eternally is a beautiful harmonious opening which leaves its sound imprints, while depicting the very particular universe of Nattefrost. Where the Gods are Watching is a short nervous track which, with a hatched sequence, reminds Jean Michel Jarre's analog momentums on his Magnetic Fields. A nervous and jerky sequence which pounds a hiccupping tempo beneath heavy layers of a synth with threatening rumblings while another sequential line, which espouses a similar but more melodious rhythmic, criss-crosses the lead one hammered by symphonic percussions and coated of a suave synth to conflicting harmonies. It’s a short but thoroughbred track, as Descending from the Stars and its heavy circular rhythm which embraces incredibly well the first rhythmic incursions of Jarre. A nervous track sat on electronic percussions and frenzied sequences which skip vigorously on a sequential line to titanic undulations flavored by a hybrid synth where the nasal and symphonic breezes have difficulty in following a rhythmic that furious. Through Clear and Frosty Nights continues this musical incursion of a world of heavy sequences capped by superb synth melodies which sing in perfect symbiosis with its sequential movement. A very beautiful track which borrows a more minimalism way with this sequential movement which is fading out in space to bursts in a beautiful melody.
Visions of has Pale Moon can easily compares to a variant of Through Clear and Frosty Nights except that the rhythm is more shaded, heavy and slow. It’s a short but effective track, with its feminine voice which blows some words in an atmosphere of interstellar paranoia, on a tempo leads by percussions which slam as drops of water falling in an irregular flow on a ghostly synth line with intriguing steams. Valhal is Absorbed in Dreams and Yearning’s track that really got me into Nattefrost sound universe. A sequential line emerges from an intro as cosmic as static to shape a rhythmic hammered of chords from which the resonance moulds a timid echo. A complex sequential movement takes shape whereas several chords are meeting around a synth with cooing parade in loops. A nasal and melodious synth from which each chord seems to possess its shadow and hums beneath beautiful percussions and a mixture of sequences which supplies an enormous rhythmic support. The movement strikes cosmic ambiances and skips in a sidereal space fills with suave synth and mellotron layers. It’s a superb passage where the indecision reigns in a perfect melodious symbiosis, especially with the arrival of more melodious chords in middle- course, with this wonderful tune which eats constantly the hearing. Valhal embraces then a slow atonal phase where blow cosmic winds. A short phase disrupted by a beautiful sequential movement with chords more melodious than percussionned where Bjorn Jeppesen recites an ode which finds echo in sidereal winds’ caresses. As Where the Gods are Watching and Descending from the Stars, Absorbed in Dreams and Yearning is a track that has a very Jarre approach with beautiful warm synths and analog tones which waltz on nervous and juicy sequences Immersed in a cosmic broth the track flows with a harmony which becomes more complex as it evolves, as all that comes out from Nattefrost first opus. The Northern Lights ends this opus on a very atmospheric note with a track that clashes with its heavy movement flowing between two cadences and which is a variance of the infernal and frenzied lines that are glancing all over Absorbed in Dreams and Yearning.
In accordance with the guide of press, Nattefrost’s Absorbed in Dreams and Yearning is really an opus which effectively possesses a strange sonority. Even if Berlin School style is not quite in danger it is growing its deepness quite solidly. Absorbed in Dreams and Yearning is at once a dark and melodious album stuffed with a bubbling sequential universe with crossed rhythms. We have here some ingenious and stunning rhythms wrapped hyper melodious synth layers, from where we can feel a Jarre connection. I quite liked it from start to end and I’m very impatient to hear the next opus of Nattefrost; a new artist amply interesting who seems to have a good potential of creativity. Berlin School in a new kind of way! That’s doesn’t happen every day.