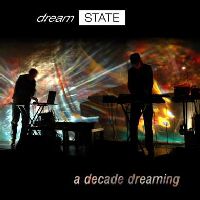 For some, ambient music is atonal, even dead. It is not completely true. There are EM artists who know how to sculptured ambient musical structures and give them a life animated by subtle and discreet oscillations or slender resonances forms which resound in the echo of an abstract music. I learnt to appreciate ambient music by listening works of Steve Roach, Robert Rich and more recently The Glimmer Room and Konrad Kucz. Ambient music can easily be compared to still-life or abstract paints. Artists must have an overflowing imagination to make us live their feelings and to make us travel on their slow evolutionary strata. Dreamstate is a band that exactly molds sonorous images with the dexterity of ambient music big names. It’s a Canadian duet which sculptures an ambient EM without borders. No sequences nor rhythms, only oscillatory circles and modulations which move such as jellyfishes on linear sound arcs. A Decade of Dreaming is a compilation that includes 12 tracks played at The Ambient Ping, a Toronto club that presents concerts of experimental and ambient music.
Premonition opens this compilation with a heavy misty pad with somber oscillations. Synth layers are escaping from it, hooting in oblivion to resonant arcs. Sound hoops over sound hoops, atmospheric layers of Premonition waltz lazily to the keenness of Dreamstate modulations, propelled by their waves to reach higher summits. Ambient and dark, Premonition is a slow night flight where slow reverberations wind around tones and heterogeneous synth lamentations, guardians of our sleep. A track with oblong morphic strata which calms down the dreamer, quite as, Sandstone and the dark Processional with its resonant hoops. Soundscape For Richard Wright begins with fine crystal clear notes that fall like rain drops… a bit as Echoes, from where the connection to tied that track to a homage to Pink Floyd’s own Rick Wright, except that it doesn’t sounds like Floyd at all. Soundscape For Richard Wright is dark, but musical, with oscillatory waves which are entwining in a perpetual circle imprinted of slow resonances. Mellotron strata which oscillate and move with strange laments, like voices coming out a Theremin, in a cosmos filled of oniric stillness. Notes of guitar / harp accompany crystal clear keys of a synth with cosmic tones. Jharna Revealed revolves delicately, such a sonorous prism in a staggering cerebral journey filled with beautiful mellotron pads and notes of a string instrument with an oriental flavor that a celestial voice recovers by brief furtive breaths. By moments, we have the impression travel within Robert Rich or Steve Roach territories, as Laika's Last Orbit, Elinvar, Premillennial Landscape 2 which embrace some tribal fragrances or then within fusions of lunar and tribal worlds that float over the metallic universes of Sandstone, The Storm Within and Premillennial Landscape 1, but always Dreamstate confirms its originality with a beautiful union of its oscillations and modulations which move as electronic jellyfishes which criss-cross Nocturnal Passage. A track which strangely swarms of a subterranean life where noises from echoes’ caves are entangling with quixotic waves around slow morphic pads showing the paradox between Rich, Roach and the Toronto duet and an intense track as Universe City Line.
A Decade of Dreaming is a nice compilation of a diversified ambient music. A music that we already know to have heard influences here and there. But it’s a compilation that is also a beautiful invitation to discover this little underestimated universe of a kind of music to often compare to still-life genre. An album available for a little $5.00 or simply free in a downloadable format this site; http://www.dreamstate.to/decade/