The musical structures of Axess are doubtless the ones which lend themselves best to heavy riffs and solos of Max Schiefele's guitars that was the heart of Contact’s magic, the first collaboration of the German duet in 2004. Six years later, this Axess / Maxxess magic returns adorned our ears with a very beautiful and diversified album. A sharply more melodious album where EM borders are a little hustled with ambiances closer to Hard Rock and Cosmic Space Rock. Impact, it is 6 solid tracks where rhythms abound in strong harmonious approaches. There is around this album a fluid musicality where melodies which pour around a unique fusion synths, keyboards and guitars have never sound that good. 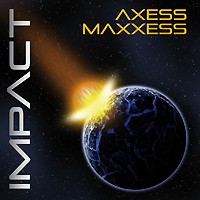 Soft guitar riffs pierce a fine and sinuous synth line on Breath’s opening. Scrolling in loops, riffs are suavely melodious and float like brief solos on a soft rhythmic which is settling down with delicate electronic percussions. The light and jerky rhythm of Breath flows on short guitars riffs, fine percussions, a discreet bass and a syncopated synth line which encircles synth spectral breaths and solos of a melancholic guitar. Engine starts slowly with a very electronic intro where sequences tumble in a lively staccato, behind a cosmic background. The tempo is in constant progression with rippling synth breezes and bass-drum hits which pulse and meet riffs of a heavy guitar which split the rhythm here while escaping concise solos. Engine embraces then a floating form with crystalline sequences which encircle an atmosphere adrift, survived by nervous percussions that pave the way to a hatched rhythm fed of heavy riffs and furious solos, plunging Engine into a curious mix of Hard Space Rock. A very good track that rock the barn, quite as the 2nd portion of Impact of which the intro is more languishing and embraces a beautiful structure of blues. Notes of a nervous guitar glean behind a beautiful cosmic, a bit as U2 but in space, on heavy percussions. The tempo is evolutionary but remains so sensual, even with percussions and sequences which flicker fervently here and there while staying in a cosmos, and explodes a little after the 3rd minute with strong percussions and a nervous keyboard which shape a furious rhythmic, the ideal pretext so that Maxxess bursts out with loud guitar solos. And then the rhythm of Impact will be crossed by short atmospheric periods, before renewed with bedazzled passages where riffs and keyboards with spectral breaths plunge us into an ambiance of progressive cosmic rock.
Into the Blue is the only track that gets closer to the Berlin School style with its beautiful sequences which wave in spiral into an atmosphere as cosmic as electronic. Arpeggios which dance in loops, in a beautiful melodious carousel filled of chords that are more and more heavy, until the riffs of Maxxess bite this soft tempo which becomes a heavy electronic ride spiced up of heavy guitar solos and divided by more silky and very melodious passages. I like this fusion synth / guitars which moulds splendid syncretic musical breaths and which glean all over Into the Blue. Furious circular movement, Rare Circus offers a structure very near the roots of a techno trance with nervous arpeggios which collide on banging percussions. A stunning track where the German duet abandons the mastery of their main instruments to dive into a furious spiral livened up by rhythms and keyboards with layers which float on rhythms waving with frenzy. A rhythmic heavier than Mysterious Times which, after a long cosmic intro, fidgets on nervous notes of guitars to explode on resonant and hypnotic percussions. A split up tempo, a little as on Impact, with a magnificent meshing a synth / keyboard, a little as on Into the Blue and which ends its race towards a more bluesy tangent, a little as on Engine. In brief, it’s a kind of summary which includes all the musicality and styles of Impact and a track that would make a very good single, because it is very representative of the versatility surrounding Impact.