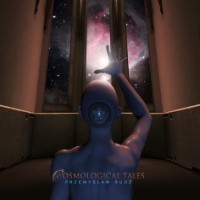 It’s with a full blast from a metallic synth Through the Planck Era opens. These are shots across the bows that strike, making us jump, among which synth resonances and residues spread their tones over fine twinkling notes, paving the way to strong twisted solos of synth which roar in a powerful electronic atmosphere. After this deafening intro, Through the Planck Era floats between two zones of rhythms with multidirectional chords sequences which mold a serrated pace. An ambivalent rhythm with slow synth sparkle which wave under fine twinkling of glass, trapped of heavy pads of a foggy mellotron. Inside its8 minutes, Through the Planck Era reveals the musical duality that reigns towards the 6 tracks of Cosmological Tales. If Przemyslaw Rudz had seduced and gained the charm of new fans with Summa Technologia, this 2nd opus risks to disappoint them because the musical approach of the Polish synthesist is different and transcends the zones of comfort of music to thousand possibilities.
The God Particle's Dance is the kind of musical piece which hangs instinctively the hearing. A beautiful track which has all the elements to please and which begins with a mellotron waltz of which foggy pads float lasciviously with a set back soft synth whistling its melancholic air. A soft oniric intro disrupted by a sequential line with chords that skip and hiccup with good percussion strikes which hammer a pace silkily wrapped in a mellotron mist. Synth solos fuse and get entangled around sequences coupled to limpid keyboard keys, creating a cozy bed of twinkling arpeggios caught in a mellotron mist. Let There Be Light presents the first atmospheric and atonal moments of Cosmological Tales with unusual synth tones which collide in a cosmos perfumed of dark hooting and whooshing pulsations which pulse among chain of fine crystal clear tones scrolling eclectic snigger. A curious psychedelic-electronic world which slowly takes a more musical shape when latent synth waves wrap this heterogeneous introduction to make it waltz in a cosmic oblivion from where appears a delicate sequential movement with doubled chords. Chords which waddle in a zigzag hunted by reverberations and synth serpentines, before acting alone in an ephemeral tranquility rushed by heavy synth strata with edgy orchestrations. Let There Be Light espouses then a rhythmic structure which skips such as street gangs’ allures in an environment punctuated with sequences which tinkle among suave solos of synth.
Islands of the Universe is an intense cosmic ballet that will end as it begun. A long track, more atmospheric than atonic, which presents us another facet of Przemyslaw Rudz. The intro plunges us into a musical universe submerged by strange breezes and reverberations of a cosmic tribal world. Rumblings of galactic thunders and shooting streaks accompany this mixture of tribal elements, reflecting the universe of magmatic fusion of Jarre on Les Chants Magnétiques. This atmospheric intro makes room to a more melodious segment where strata of a hatched synth waltz such as pleasant snowflakes, reminding the fabulous structure of Snowflakes are Dancing. These synth strata dances with soft notes of a solitary piano before being melt in vast synth breath which recovers the middle of Islands of the Universe by a somber abyssal coat. A cold silvered sequence à la Stuntman from Edgar Froese is coming out of it. She waves and pulses under a rain of cosmic streaks, embracing Frédéric Mercier's analog and oniric universe in Songs from France, while another short-lived sequence is joining to strum brief fast flows, before Islands of the Universe dives back into the tribal and morphic approach of its intro. Always in ambient and melodious mode, We Live Here presents us a magnificent ode to melancholic with a magnificent piano which spreads its solicitude a pouring rain and thunders being serve as its companion. Very beautiful and sensitive, it is the kind of music that melts the ice around the misled souls. Disputable Future encloses this 2nd album of Przemyslaw Rudz with a more rock approach where nervous and feverish sequences are joined by unbridled percussions and where the synth with stormy undulations and twisted solos is supported by a heavy rock guitar. A heavy and powerful track which doubtless tries to rally fans a bit confused whom had discovered a more rhythmical and melodious Przemyslaw Rudz on Summa Technologia.
Although very different from Summa Technologia, I quite liked the musical adventure of Cosmological Tales. I discovered there a musician who, without denying his influences, goes out of his comfort zone to offer an album where rhythms still heavy are mixing quite well with atmospheres as poetic as oniric. Cosmological Tales is an album divided well between rhythms and atmospheres with all the power and the sweetness which livens up these two paradoxes which live pretty well on this Przemyslaw Rudz 2nd effort.