I already see you frowning of the eye, ears waiting but skeptics or out of phase by another album from Pollard and cie. After all, are we not tipsy by all these electronic musical creations which copy the Tangerine Dream style of their years of glory? Well, it looks like it’s a need! Time out of Mind is the ideal name for this other collaboration between Brendan Pollard and other artists who flood their musical melancholies in the very vaporous and cosmic spheres of the 70’s. Brendon Pollard with Free System Project and Hashtronaut! A gang of chums which meet and jam a couple of days. That gives a hell of an opus. No doubt the best album of EM, Berlin School style, in 2009 and even beyond! 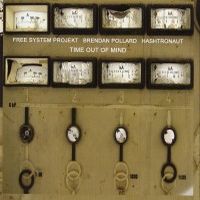 The Valther Twins begins in a soporific cosmic universe with thick clouds of stellar dusts which float among psychedelic sound particles. An intro where the composite sonorities float in a cosmos covered with brief caustic synth layers. A sweet intro which caresses softly the psychedelic era of a Floyd on LSD and the one of a dreamy Schulze who looks after the universe’s door. Superb I would say! A superb temporal journey which dazzled even more with a symphonic synth which blows the measures of the Dream on Cherokee Lane, dispersing spatial ashes to make room to a splendid sequence which exchanges its swaying chords beneath semi-darkness’s of a rising bass structure and a mellotron with breaths of a romantic sweetness. The rhythm is traps in this astral journey and spreads its aftereffects on fine percussions whereas that a synth with mephistical loops howls to silence on a sequence which accelerates the pulse with a heavy imperceptible zigzag in the howlings of an ethereal guitar. This is a great Berlin School there à la sauce psycho-progressive that we have there. The vaporous intro with psychedelic breezes of Exodus is shorter. It soaks in heavy reverberations which act as circular lighthouses, enlightening a sweet hopping sequence which initiates an innocent rhythmic but whose flow becomes more fervent, espousing Phaedra’s somber heaviness. This cadenced gravity filters a charming mellotron flute which perfumes this wild air of a paradoxical sweetness, while the sequence is more frantic and the synth more perverse with its layers which surround a closed place from where escapes good guitar solos.
Time out of Mind is the epic track of this opus with very Tangerine Dream sound aromas. Made in the shape of the introductory structures of The Valther Twins and Exodus, Time out of Mind opening is slower and rests on a suave mellotron with diverse flute tones which cross the paths of a cosmos with austere choirs. We feel the bass frequency of a heavy cosmic resonance, such a slow impulse of a space shuttle, which has difficulty to moves among this stream of cosmic particle. This reverberation hatches its linearity, propelling a heavy sequence which spawns in a strangely poetic astral nebulosity. A synth dresses this sequence of beautiful vaporous strata in a musical sphere where mellotron, sequences and synth merge in a complex harmony but so soft at the ear which we do not see, nor hear the time fly. " Option C " encloses this brilliant opus with the same concept as the longer tracks, except that the sequence is more caustic on a mellotron of which flutes cross a synth with rippling layers which imprison the musical uncertainty into the synth symphonies of the Dream.
It is obvious that with such an artistic panel of so talented musicians highly inspired by the music of Tangerine Dream from the 70’s, as well as the Berlin School style from the same area, that Time out of Mind would of be tinted from the first note to the last one of this musical influence. And it is. But it’s well done and well structured. In fact Time out of Mind is a superb Berlin School EM album which uses perfume aromas of Phaedra, Rubycon, Atem, Zeit, Ricochet and Encore with zests of dreamy Schulze and Pink Floyd on strong hallucinogen essences. Admitted that such a cocktail can only be divine!