A collaboration Roach/Seelig can only brings us toward a musical adventure which floats and blows beyond no man’s land. With instruments as eclectic as acoustic, like Mark Seelig vocal cords and basic instruments of a budding EM, the duo guided par their spiritual and ecological surges offers in Nightbloom a stunning musical journey where music espouses savors of a virginal ethnic land weave from the fertile imagination of this eclectic American duet. 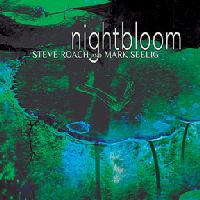 Divided into 5 long parts, Nightbloom begins with a dark sinuous wave twinned to a voice with strange intonations as suave as unreal. Diphonic breathes that come from an elusive depth and which are intermingling to slow reverberations, molding a slow intro with breeded sonorities between vocal cords and resounding drones. Around the 8th minute, a rhythm is settling. Soft it pitches under fine tambourined percussions and groovy effects, moulding a soft and strange trance livened up by heavy buzzes to fatty resonances that are twisting around a structure with finely nervous jolts. Seized of a tribal tempo with a hypnotic trance movement Nightbloom I releases tender hybrid vocal trickles which illuminate a dark and intriguing land, where heavy and slow droning strata as well as fascinating trace an attractive duel organs/instruments. Part II is deploying under large reverberating loops and tribal percussions of which strikes resound in a deep echo. This unusual crossbreed of paradoxical sonorities to a world with ambivalent harmonies shapes a movement without rhythms, evolving in slow motion in a vast tenebrous plain where the night seems eternal. A night disrupted by heavy percussion strikes and multiple heteroclite sounds which draw a surrealist nature as example; big toads with sucker paws which gambol and jump with a heaviness and slowness extremely lyrical. Diphonic sounds fuse of everywhere, like synth laments, and inundate a placid world which lives in reclusion into a musical universe so unrealistic but as much spellbinding as the most beautiful moonset on a sun of Mars.
Percussions fall on Nightbloom III, sculpting an out of tune rhythmic with the slowness of incantations as well sung as played by a fusion of voices, drones, zones and reverberating loops. A little as if we are attending to a solo of tambourines, with a sound tapestry that defies all musical laws. Toward the10th minute, percussions are keeping silent. They make room to long and sinuous shamanist incantations which wave and amalgamate with resonance on Roach ethnic instruments to continue their slow spiritual atone on desert plains of Nightbloom IV. Suave, this 4th part joins the lifelessness den with its spindly hybrid reverberations, whereas softly the amphibian rhythm gets out of its lair, moulding with wonder the unruly paradoxes which swarm all around Nightbloom since its very first stammering to be pushed in a dark quietude drawn by declined breaths of Nightbloom IV finale. Nightbloom V gets out from the oblivion of quietude and takes back its hordes of breaths hustled by hyperactive percussions. A grandiose finale for an opus that always kept us on tenterhooks with this fusion voices and ethnic instruments on latent rhythms. Rhythms which explode with strength on a short tribal trance, before the atonal mood takes again its rights with hot breaths and twisted resonances which float with softness, as dust of the powder is dissipated after a furious combat on a desert and syncretic plain.
Fascinating is the word that sticks to mind after this musical adventure that is Nightbloom. An album intense and rich in heteroclite sonorities where voices and the nonconventional instruments of Steve Roach draw an astonishing unreal world which takes the forms of our imagination on involving and mesmerizing tribal percussions, unifying the paradoxes of quietude which abound on this astonishing dance of the spirits from fauna. A very beautiful album where the ingeniousness of Roach and Seelig makes us spends astonishing moments of a trance driven back in the abysses of our subconscious.