Quietly Björn Jeppesen is gathering the fruits of his skill. Since Absorbed in Dreams and Yearning the Danish synthesist constantly sees his star shone in the small growing universe of EM. With its unique style where nervous sequences, rhythm permutations and ambient passages in a Berlin School style cross his Scandinavian melodies, Nattefrost won a larger public and present concerts at a more constant scale. Just before the release of his upcoming album on Groove label, Dying Sun/Scarlet Moon, Björn Jeppesen presents his first live album. A live, with 2 concerts on it, that covers a good part of its 3 CD released on Groove. 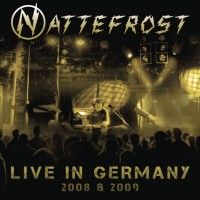 Live in Germany first part consists of a portion from a concert held in Wuppertal for the Ambient Experience II event on May 3rd 2008. For this occasion Nattefrost was accompanied by Robert Schroeder on guitars. A shortened version of Valhal starts this concert. Suave and softly ambient, the intro clears the path to free sequences which open the very harmonious section of this so oniric synth which pushes beautiful synthesized odes under great percussions. A wonderful track, that one finds on Absorbed in Dreams and Yearning. Unfortunately, and as on Tracks from the Archives, the sound quality of this concert is very limited. A rather cold sound, a little as those bootlegs recorded from the audience. So it’s with a diminished sound that we follow the evolution of Searching for a Distant Planet, which we also find on Tracks from the Archives, with sequences colliding on an ambient veil. A great track which sounds definitively better on Underneath the Nightsky. Kopenhaachen and Perfectly Connected, both from Transformation, are also suffering of this sonorous weakness. We have difficulty to seize correctly all nuances and modulations of Kopenhaachen rhythms, which we will find later on the Bielefeld section (Schroeder absent this time), whereas the sound quality of Perfectly Connected is better defined, allowing thus to follow these frenzied sequences which feed a nervous rhythmic of which Robert Schroeder guitar solos are however difficult to seize suitably.
The sonorous quality of Bielefeld concert is definitely higher. Decadence opens the ball with nervous sequences which hop furiously on a slightly syncopated structure and a beautiful bass line which hems an incisive cadence. The synth frees beautiful dark layers and solos in a cosmic sound context, bordering Jarre cosmic side. A heavy track that one finds on Transformation. The Swan, which will appear on Dying Sun/Scarlet Moon, is a strange adaptation of Camille Saint-Saëns track from Le Carnaval des Animaux. We are far from an interpretation as quiet as the original one with sequences which collide violently. Hybrid, the synth shapes a splendid melody in a cosmic in an atmosphere of cosmic carnival. I like Björn Jeppesen audacity which is attacking a beautiful monument while letting this superb piece of music flows under bridges of unchained sequences, Nattefrost trademark. Another track from Dying Sun/Scarlet Moon Draconian presents sequences always so heavy and resounding which trace a random rhythmic schema before embracing a technoïd phase. Hybrid, the tempo hesitates between its heaviness and measure beneath layers of a synth whose loops coo among dark and misty strata.
Great cosmic ballad from Underneath the Nightsky, The Pleasure of Tranquillity is played with a more sequential punch, but preserves all its melodious senses beneath beautiful cosmic streaks of a charmer synth. Caressing Jarre fragrances with a synth filled of symphonic strata on a groovy tempo, Descending from the Stars is redoing all of its beauty. Winterland displays as much intensity with its surging sequences which trace a frantic flow. The synth there is fluid and frees strata which intermingle with beautiful solos that replace Schroeder guitar on Underneath the Nightsky. Presented for the very first time on Tracks from the Archives, Nightfall is interpreted with more mordent; particularly because of good percussions play that hammer this heavy rhythm which undulates under a strange aura from the bottom of seas. The concert of Bielefeld ends with 2 superb interpretations of tracks from Nattefrost last album studio, Transformation. Even with the absence of Schroeder on guitars, Kopenhaachen is boiling of energy with its rhythm based on intersected sequences and its synth with sounds of festive trumpets. A solid interpretation for a superb track! New Direction concludes with this rhythm which hops slightly on sequences filled of an electronic fixity. Electronic sonorities which pullulate there form a dense electronic and cosmic cloud, from which escapes a melody as vague and nuanced as the crushed rhythm of A New Direction.
Live in Germany shows us a Nattefrost who communicates constantly with his public. Between each track of the Bielefeld Electronic Circus concert, Björn Jeppesen informs and discusses with his audience, demystifying the fact that the mutism of an artist in concert is synonymous with the respect of its icon of creativity. If that annoyed some people, that makes me think that Nattefrost is a concerned artist of its public, and well beyond the words. Even if the Wuppertal concert has a quite poor sonority, the Bielefeld show is quite simply brilliant. The music presented is done with the nobility of its evolution and the straightness of its broad outlines. A concert where Björn Jeppesen shows that an EM spectacle isn’t necessarily pre-recorded and that there is place for some modifications within tracks presented.