CONRAD SCHNITZLER:Minced Valves/ From the Lost Tapes of 77 (2010) 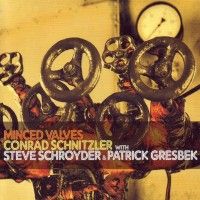 Minced Valves from Schnitzler, Schroeder and Gresbezk trio is a true voyage in the underground Berliner world of the 70’s. A collection of 9 tracks, including 4 writings by Schnitzler alone (Pra, Cyr, Tri and PCT), which spreads out the experiments drawn from the heteroclite musical boxes of that era. A caustic voyage certainly, but which will reveal to be a delight for fans of this music (well if we can call that music) style. And believe me, there are a lot of Con fans out there.
Pra starts this odyssey of sounds with a slender sound filament which escapes from the caustic reverberations in a universe of the most heteroclite. Here there are no rhythms, but sound samplings which pile up in order to create crossed ambiances between the eclectic and spectral moods. Oblong resonances take the shape of electronic drones in a sound Babel where fine sonorities of flutes are scattered in a very variegated multi sound canvas. A little as with Fripp and its Frippertronics, Cyr is an amalgam of reverberating circles and chords which turn around a water drop, falling with a regular interval, and from multiple layers of synth or violins (there is no explanation on the Ricochet Dream Digipack about the instruments used) which tears a heavy sound web with fragrances of Floyd on Ummagumma, just like the length and whimsical PCT. Tri is an abstract procession on a hatched synth line which subdivides its sonority on undulating serpentines in a universe of percussions with crossbows sounding. A sound combination that we hear often on Minced Valves. MOD is a slow synthesized incantation heated by beautiful spectral and caustic layers. A nice cosmic and ambient piece where the synth howls behind a serpentine which undulates with sound effects similar to cold percussions in this silence laminated by a very morphic synth. Pulsations with varied forms animate the hypnotic movement of Cyc, a slow abstract march which furrows a cosmic oblivion with very electronic sound effects on a structure which offers a light crescendo. Hip opens the rhythmic portion of Minced Valves with percussions style Tam-tams which shape a strange singular frenzy. These percussions are also present on Lyr, where the rhythm is rather light but strongly hypnotic and flown over by a big ugly fly with huge wings. Red offers a strange tightrope walker walk on metal wire which undulates in a cacophony worthy of the sound experiments of the underground years. Heavy, but stagnant, the tempo ripples in a total statism, a little like carving a single and abstract vision. Minced Valves of Schnitzler, Schroeder and Gresbek trio is not really for my ears. As far as I’m concern it’s a completely abstract work where ambiguities have the top on any form of rhythms and especially harmonies. An album with rare snippets of harmony but with a sonority rich in diversity that should please a lot to fans of, and they are several, Conrad Schnitzler. Him who, still nowadays, has fun yet in all its panoply of heteroclite sounds.