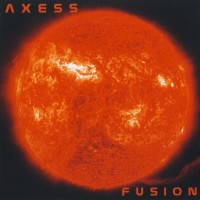 More than one year after the superb Voices of Dawn, Axel Stupplich gets back to charm our ears with an album where ambivalent rhythms are grafting to hydrides structures. If some tracks are unambiguous (Speed of Light and Schwerelos), other tracks of Fusion evolve in an environment where the rhythm is latent, such as slow solar implosions, with feverish and savages sequences which nourish musical canvas at the opposite of their cadenced structures. An album where Axess spreads out as well his romantic side as cosmic and melancholic ones, while passing by his small techno and upbeat approaches, without ever disavowed his Berlin School roots. In short an album of all and for all tastes.
A dark wave did not finish undulated that already a cloud of frantic sequences falls down on the very energetic Speed of Light. A breathtaking track with its range of sequences to multiplied and diversified chords which are collide in a powerful rhythmic structure where electronic percussions and twisted waves strike and resound, adding thus a heaviness at a speed which exceeds the light of the good old German EM. Between the frantic techno and the upbeat speed, Axel Stupplich lays down soft ethereal pads of mellotron and shapes synth solos sometimes suave and sometimes strident, reminding us his Berlin School roots. Fusion is the calm after the sequenced storm that was Speed of Light. Suavely poetic and languorously hypnotic the tempo of Fusion is relax and progressive, evolving on good percussions strikes, bass drum pulsations and sequences at the same time moderate and frantic. A rhythmic amalgam wrapped of a splendid synth line which subdivides its layers, and their wanderings, in a warm ethereal harmony. A soft mellotron covers this cadence sometimes soft and sometimes stormy, like a lustful oniric waltz or a fine bolero, at the same time moving and dramatic. Cawing of cosmic birds overhang the black cosmos of Pictures and its intro as metallic as cosmic. Dark the movement waltz awkwardly, brushing even an ambiance slightly distressing, with a dark synth line with wavering reverberations from where escapes whispers, linear embros, metallic hoops and flickered percussions which weave an oddly hatched structure. Strange and slow sound maelstrom which is gradually dissipating to let heard a fine sequential movement which zigzags in ascent of its hesitant chords under synth pawing. A fine synth line undulates and hoots, like a phantom threat, on this ambivalent structure from where the first bites of Maxxess guitar are made hear with good riffs emerging around the 7th minute. They espouse wonderfully this hesitant structure which takes its take-off with mellotron wings and fine percussions. Pictures adopts then a suave and languorous movement where superb and celestial guitar solos fly over heavenly mellotron pads and delicate fluty breezes to tangle up in a soft cosmic daydream. A very beautiful track tinted of a romantic magnetic.
Nefilim is built a little in the same mould as Pictures, guitar in less. A strange circular growl opens its intro, such a machine which is quietly getting on, under a scintillating sound prism. A fine pulsation draws a sober march girdled of a superb synth with very moving layers and spectral solos which undulate under a cloud of sequences. Sequences which dance and hop feverishly, pointing out the universe of Software while illuminating Nefilim of an oniric beauty, whereas percussions mold a slow rhythm moderate by a synth with melancholic solos. Splendid Nefilim is torn in its evolution with its percussions which seek to explode the rhythm. A tempo smarmily captive of its sequences, which whirl without ever wanting to leave its rhythmic corridor, and of its synth to suave solos, flowing such as tears of sounds. A very beautiful track, just like Pictures and Fusion! Schwerelos offers a beautiful groovy structure of which premices are a beautiful bass line, keyboards keys a little funky and good percussions which shape a sustained and hatched rhythm, coated of beautiful misty layers. Simple and effective, Schwerelos sticks to the ear instantaneously, like Speed of Light but without its explosive mordant. In this regard, if Fusion, Pictures and Nefilim charmed you, wait to hear Under a Starry Sky. Quixotic blowpipes breaths tear an intro as cosmic as atmospheric before that a superb sequential line with chords that hop and undulate don’t wake up the very beautiful Under a Starry Sky. And there, a superb synth dandles our ears of musical nectar where solos and melodious pads dance under a marvelous carrousel of sequences quite as eurhythmic. Sequences gambol with fine percussions, giving to Under a Starry Sky a soft and suave tempo which swirls like an oniric bewitching before being huddled in the hollow of a splendid musical refrain worthy of Vangelis greatest moments. A very beautiful track that makes arm hairs rise and melt moments of nostalgia in fine tears of delivery.
It remains little to write after a track as Under a Starry Sky and its innumerable mellotron synth layers that lull stars while exhilarating us of oniric softness, except that this track depicts all the ambiance as much nostalgic, melodious and astonishment liven up which surrounds this little marvel that is Fusion. From furious Speed of Light to melancholic Under a Starry Sky, Axess 6th opus is filled of softness which scatters on ambivalent and hybrids rhythms which pullulate on throughout Fusion. As far as I’m concern Fusion is a big heartthrob with 50 minutes of music filled of hybrid fragrances which glean between sweet space rock and true Berlin School with sequences as limpid as crystal. One of the top 10 of 2010!