Axess is Axel Stupplich, one of the three synth players from German progressive EM band, Pyramid Peak and First Light is his first solo album. An album very close to Peak sonorities and we won’t complain about. It is rhythmic and well sequenced with beautiful small jewels of tenderness or bludgeoned sequences. An opus that we have to listen carefully in order to catch all subtle progressions that open a first extremely convincing album for Axess.
Mellotron layers, as Pink Floyd’ Shine one you Crazy Diamonds, float in a vaporous ambience. Awekening atonal intro is short because a heavy sequencer bags the rhythm on good sequenced percussions which accelerate a tempo daze by sublimes whirling synth layers. The musical depth is developing with keys that circle on a heavier sequence, pierced by superb solos, à la Peak sonorities. A pulsation resounds in the magnetic field of Distant Sun, where scatter notes and percussions are graft with a vertical sequence which espouses a jerked movement. Synth layers, astral choirs and metallic streaks cover the waves of a sequence where the rhythm crescendos subtly, making Distant Sun a kind of static half bolero. Echoes of Eternity is a strong track. Rhythmic, the musical structure is moulded like the one in Distant Sun. The impulsion is struck by clear notes and solids percussions, subtly diverting its course among multiple synth surges, including fabulous solos. A true intense musical swirl which dies down in semi course on an atmospheric rain shower, where synth streaks float sinuously among analog and metallic sound effects. On the echo of a lost drone, arise a superb hatched sequence on slamming percussions. A rotary sequence accompanies by superb solos, tearing and harmonious which we would like to hear again and again. 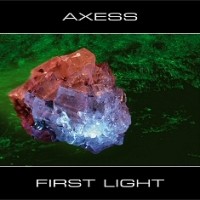 Notes of First Light form a sequence in loop on violin mellotrons. On vibrating pulsations, the sequence becomes more limpid and undulates on strikes of a quixotic bow, calling for a violin charge. A more liven up pulsation on intense sequence, synth solos overhangs with the Peak sonority a methodical movement which follows a sober itinerary. Shadows Of Dawn begins on a slow tempo. Dragged by sound effects and tuneful streaks, the beat becomes animated slightly with fine felted percussions and a more wrapping synth which whistles, as much as it fuses, short harmonies. A beautiful line of bass moulds the ambiance which arises on nervous keys and heavy sequence, which turns towards a techno dance beat on a more lively rhythm with tinkling percussions and synths with melodic solos. The intro of The Sermon is superb and the melody reminds me of Vangelis on Albedo 0.39; Alpha. A shimmering melody that a ballerina would furrows with grace. And even more when one sequence is moulding to it, adding heaviness and sensuality on a slow move to overwhelming and symphonic synths. A superb electronic ballade! Tibetan gongs on wrapping layers open Infinity. We expect a title with Tibetan ambiance, when short streaks oscillate on a rolling sequence, giving the signal to a rhythm whirling with fury. Sequences with smashing and limpid chords wind on multi spins and squaking percussions to shape a metallic techno flooded of virtual breathless choirs. An aggressive track that will light up your Zombie-Rave parties!
First Light deserves that we stop on this first Axess solo project and gives a good hearing. Don’t do as I did; throw the album to oubliettes without really giving it an attentive listening. Because on Fisrt Light, we go from an extreme to another; beautiful Berlin School to hypnotic techno trance dear to Axess structures, which slightly touch the Peak style. First Light is an opus with multiple sequences that subdivide rhythms on catchy melodies, stamp feet techno with synths to sonorities equivalent the many colours of prism. A truly good CD that’s worth the buying.