For more than 2 years, either since the phenomenon of selling MP3 or FLAC music format of EM made his appearance, a multitude of new names appears in the firmament of EM. A large possibility of an artistic multiplicity in a period where even my grandmother could create music (if she could put herself into it), which brings its batch of concern. And we have to fear this and be suspicious. Because it’s a similar event that flooded the real EM in the 80’s and 90’s, in a torrent of new comers whom made in an artistic simplicity, structuring the bases of New Age while trivializing those of the EM; the Berlin School style, the leading kind that supported and guided the basics of progressive and psychedelic musical world. 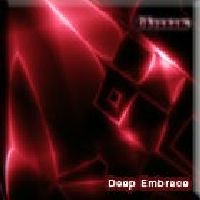 American artist who immigrated in the Netherlands, Dhyanam nests at AD Music label; David Wright's property, the man behind Indigo and the creator of magnificent works of an EM which strangely flirts with the Zen side of New Age. So Dhyanam most be inspires by Wright cause he proposes an album more centered on a New Age approach than purely electronic music. Although beautiful, soothing and attractive with beautiful melodies which flow as a quiet brook, Deep Embrance is much more an album of relaxation and easy listening than a complex EM Berlin School style. As soon as we listen to Fluidity one feel entices though relaxation mood with its soft chords which go round as a carousel or a kind of soft lullaby. It’s soft and very peaceful, quite as Fresh Flowers, Silent Talk and its fluty sound that melt the palest souls as well as A Second First Impression. Mora Breakfast brings a livelier cadence. A rhythm that exudes the instrumental limpidity of Fluidity and others music pieces like Empty.
In short, Dhyanam proposes a collection of 12 sweeties where synths and keyboards serve more the purpose of melody than the progressive complexity where sequences are extremely rare and sobers when present. Soft compositions which go by, one after the other, without disrupting or make eardrums frowned. A dozen unequal titles where the purely electronic approach can be feel on Crystal Papillon and The Smell of Rain, while Open Secret embraces a small and cute electro-pop side. But Dhyanam makes a higher bid of arms hairs rise by an overexploitation of a mellotron programmed for the purpose of a hyper melancholy with very moving orchestrations as on The Source and Deep Embrance to name but a few. A creative approach very near the soil of a Vangelis in slack of inspiration, Ray Lynch and Kitaro post Ki. It’s cute, well done but not really extraordinary and it could surely please my lovely girlfriend as well as the romantic ones and those who mix New Age as EM.
In spite of an evident artistic ease, Deep Embrace remains a charming album, we cannot deny that. Tracks such as The Source, Silent Talk, A Second First Impression and Deep Embrace create a good emotional impact. On the other hand the whole thing soaks in a climate of ease where Dhyanam insists too much on the romantic and dramatic effects, like film makers of love and sentimental movies, instead of making good complex musical researches which he seems to be able to go for. In all, Deep Embrace is a CD for those who appreciate a very accessible EM that crisscrosses the paths of New Age.