What stories and anecdotes around Green Desert release in 1986! Something to feed those long debates around Tangerine Dream history and legend. According to nebulous bites of stories, Green Desert was due to come instead of Phaedra in 1973. Moreover, the recordings would have been made in August 1973. For some obscure reasons, some speak about the musical contexts whereas Virgin would have wished a more commercial sonority than Ohr Music space rock of 70’s, the recordings would have been lost and it was Phaedra that came out instead. More than 12 years later, the recordings come out on Zomba Music. And even there, fans and music historians are skeptics concerning Green Desert origins. Pure and die hard fans are outraged because Edgar Froese couldn’t prevent from adding synth lines and overdubs on the original tracks, with equipment which did not even exist in73, before the final appearance of Green Desert in 1986, creating even more confusion around it of its source. 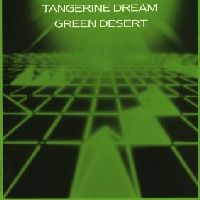 Ah yes… The music! Well it’s quite simply sublime in the full spirit of TD’s first works.
Itself the title track passes through all musical currents of this gorgeous area; long ambient intro on a floating synth to which joins a fine sequential bass line, Chris Franke drumming (he was quite good) and Edgar’s space blues guitar. The rhythm is evasive and covers the limits of floating to a much harder of the psychedelic space rock of this time. It’s like put in box sequential spasms and analog shouts of Master Schulze on Body Love. A strong music piece of which I doubt that it was completely written in73, so much the similarities with Sorcerer and Stratosfear are present. Speaking of Sorcerer, White Clouds has many of its appearances. Analog breaths on a suave synth and a superb rolling of drums cover a very beautiful melody. Astral Voyager (the main point regarding the debate around Green Desert) is a formidable music piece builds on an ultra nervous sequencer which rolls at high speed. The kind of sequences that we weren’t used to hear and this era. But it was also then that Franke and Froese locked themselves up in studio to produce a multitude of newborns sound which later will be the musical stamps of this experimental fever. So, round rhythm on a solid sequence scented of beautiful layers of a fluid synth with Mellotron essence of Froese (Pinnacles) solo works. An excellent track! Indian Summer is an ambient passage where notes fall with intensity in a calm sea of sounds, lulled by a soft dreamy synth. The kind of music that made the delight of floating music fans from the 70’s and of which you can feel the imprints on Wavelength. 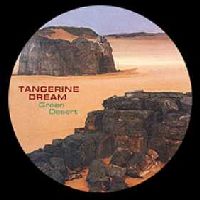 Was Green Desert really written and produced in 73? May I have my doubts? It might be written in the 70’s, but I would guess the post Phaedra era that is to say 76-77. But anyway, the main thing is its remains an excellent CD. One of the best that came out of the 80’s even if nobody’s but Edgar and Co really know. A must, only if it’s only to understand the enchantment of greatnesses that surrounded this strange duet which was Franke and Froese. Some great contemporary electronic art that should find its place in all TD fans collection. And far beyond…!